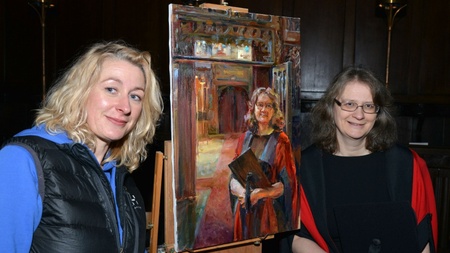 Dorien van Diemen approached the University’s Head of Medical Genetics to ask if she would like to be captured on canvas for an exhibition of the Dutch Portrait Group, to which Dorien used to belong, before the artist moved to Aberdeenshire five years ago.

“The theme of the exhibition is ‘smart’ which can be interpreted in any way, perhaps someone who is a smart dresser,” explains Dorien.

“I chose to look at it as smart as in clever and my friend Zosia came to mind, especially as she was appointed as a professor last year.”

Zosia was delighted to be approached and agreed to be painted while wearing her academic robes in the University’s picturesque King’s College Chapel.

“I’ve really wanted to capture the history of the University but I also wanted the painting to give the impression of looking to the future, of new beginnings,” said Dorien.

“I gave a lot of thought to the composition and what to add to the portrait to achieve this. I was happy to find the right spot in the Chapel that could make this symbolic connection to new beginnings and discoveries.  In the painting you'll see Zosia, with behind her an open door leading to a light filled passage, and then onto another doorway that is veiled.”

Most of the portraits of Professors I know of are of men approaching retirement, so I'm pleased to be contributing to a different impression of academia today." Professor Zosia Miedzybrodzka

The portrait was painted with two sittings in the Chapel. Dorien also took photographs to refer to, when adding the last brushstrokes to the painting in her studio.

“I’ve really enjoyed painting in the Chapel – we came at the same time each day and the light was just beautiful,” added Dorien.

The portrait of Zosia will go on display next year within the Netherlands before it begins a tour of Europe.

“It was really lovely of Dorien to ask if I would agree to have my portrait painted - it is very special,” said Zosia.

“And of course it’s very exciting to think that this painting might help portray a positive impression of the University of Aberdeen to a new audience abroad.

“Most of the portraits of Professors I know of are of men approaching retirement, so I'm pleased to be contributing to a different impression of academia today."