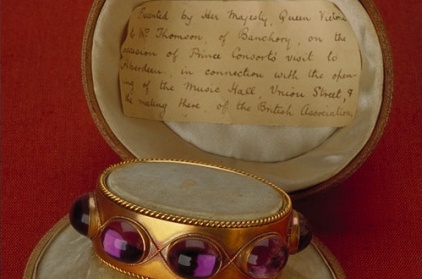 The first exhibition organised by students on a new University of Aberdeen degree programme will launch on Tuesday June 10.

Victorian Time: Spirit of the Age has been organised, curated and promoted entirely by members of the MLitt in Museum Studies – a course which began this year supported by University Museum staff.

The exhibition, which charts some of the changing ideas about time during the reign of Queen Victoria (1837-1901), is the culmination of their studies.

The students selected the subject of the exhibition, trawled the University of Aberdeen’s extensive museum collections for items to display, researched their history, compiled descriptions, created the display and designed marketing materials.

Anna Rinke, one of the student curators said they selected the Victorian theme as they were inspired by the rich Victorian resources in the University’s museum stores.

She said: “We were able to find objects related to local and university history, as well as items brought back to Aberdeen by overseas travellers.

“One of the star items that we chose to display is a beautiful bracelet presented by Queen Victoria herself to a Banchory resident during the opening of the Aberdeen Music Hall in 1859.

One of the star items that we chose to display is a beautiful bracelet presented by Queen Victoria herself to a Banchory resident during the opening of the Aberdeen Music Hall in 1859." Anna Rinke

“The exhibition demonstrates the many aspects of Victorian life and time and how its value began to change, with leisure time beginning to take form.”

Chris Dobbs, another student curator added: “Throughout the exhibition we hope to show the broad scale of the Victorian era, from the early 1800s through until the dawning of the 20th century.

“We look at how people living in this period of transition valued time morally and socially, and how they responded to the many changes taking place in day-to day life.

“The exhibition looks at aspects of the era such as time keeping, memorabilia, capturing a moment in time, collecting objects, and looking back at ancient civilisations.”

A full programme of events will accompany the exhibition including free family crafting days and Curator’s Talks from the students on a number of topics ranging from opium in the Victorian era to the Victorian’s interest in classical antiquities.

Victorian Time: Spirit of the Age will open on the June 10 2014 in King’s Museum, at the Old Aberdeen Town House. King’s Museum is open weekdays from 10am -4pm and Saturdays 11am -4pm.