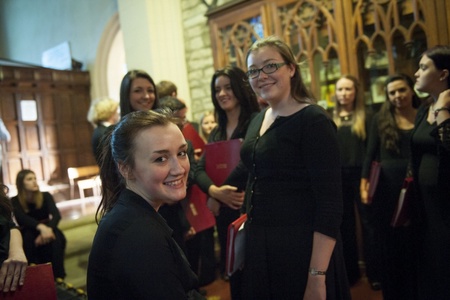 Choirs from Aberdeen and Northern Ireland will come together to perform traditional songs from both sides of the Irish Sea, given a new twist by royal composer Paul Mealor.

The Ulster Choir will sing outside their home country for the first time when they join forces with the University of Aberdeen Chamber Choir for two special concerts.

It follows a successful collaboration for the Derry~Londonderry City of Culture celebrations which saw the Chamber Choir perform with the Ulster Choir at Stormont, the seat of the Northern Ireland Assembly.

Professor Mealor, whose work Ubi Caritas was performed at the wedding of the Duke and Duchess of Cambridge, said the return visit reflected a spirit of ‘hope, peace, reconciliation and friendship’.

He said: “I was first approached by Derry~Londonderry City of Culture with a request to perform my music and I suggested the University of Aberdeen’s Chamber Choir would be happy to collaborate.

“It proved a huge success and was a wonderful experience for both choirs and the audiences who came to see concerts at Stormont and in St Columb’s Cathedral, where we featured in the BBC’s Songs of Praise programme.”

The Ulster Choir will now come to Scotland to perform at St Machar’s Cathedral in Aberdeen on Saturday June 14.

The choirs will sing Scottish and Irish Folk Songs specially arranged by Paul Mealor and Laurence Roman, an accomplished composer from the University of Ulster. The concerts will also feature one of the most celebrated pieces by French composer Francis Poulenc, the Gloria.

Professor Mealor added: “Writing new arrangements for traditional folk music is something quite different for me and this is the first time they will be performed in front of an audience.

“It will be a great privilege to hear two wonderful university choirs performing songs from both sides of the Irish Sea in unison.

It will be a great privilege to hear two wonderful university choirs performing songs from both sides of the Irish Sea in unison." Professor Paul Mealor

“We had a fabulous time in Northern Ireland and now it’s our turn to show them some Scottish hospitality and to extend the hand of friendship, peace and reconciliation through music.”

Chamber Choir member David Paterson, a fourth year law student at the University of Aberdeen, said the singers were looking forward to welcoming their Ulster counterparts and to overcoming the challenges of collaborating with another choir.

“The thought of welcoming our Northern Irish friends to Aberdeen has everyone 'buzzing' on both sides of the Irish Sea.

“Singing with another choir can present a variety of challenges, both in terms of balance and blend, however I'm confident that we'll manage to overcome this  with a few rehearsals and a bit of hard work.

“Both choirs have been rehearsing independently for the past few weeks, and conductor Shaun Ryan will fly over to join us for a number of rehearsals before we all meet on the day of our first concert.

“We have been fortunate enough to secure a prestigious performance in the Scottish Parliament which promises to be an unforgettable experience, and then we have our home concert in the beautiful St Machar's Cathedral to close our weekend of music-making.

“Members of both choirs are looking forward to successful performances, seeing old friends, and establishing new friendships which are sure to last for years!”

Fellow choir member Erin Tinney, a second year music student, added: “Last year we practically lived with the Ulster Choir. Because of this, we have made a significant link between the choirs and this was why inviting them over for these concerts was so important to us, as we felt it was time to return the favour and show them the amazing time they had shown us.

“With the concert fast approaching and exams nearly over, we’re really looking forward to singing with our Irish counterparts, and hopefully it will become a regular occurrence in one form or another.”