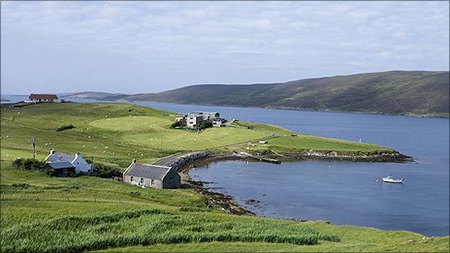 An Aberdeen linguist is seeking volunteers for a project looking at whether people can detect if a Shetland accent is 'real' or 'fake'.

Brought up in Unst, Kerry, 37, has always been interested in her local dialect and was surprised to discover in research for her Master’s degree that many speakers were unaware of how they used their dialect.

She said: “During interviews, I found many informants were modifying their speech in order to make themselves better understood by someone who was familiar with, but did not speak, the dialect.

“Linguistic analysis of their transcriptions, however, proved interesting. Many had categorically used an English or Scottish equivalent and showed no tokens at all of the Shetland variety.”

After discovering this, Kerry decided to base her PhD thesis around ‘Knappin’, the process of modifying speech to be better understood.

I was fascinated by language perception in Shetland and when, how and why a Shetlander might Knap." Kerry Karam

She added: “I was fascinated by language perception in Shetland and when, how and why a Shetlander might Knap.

“To help answer these questions and to gain a better understanding of the ‘real’ Sheltland dialect, I’ve designed a questionnaire which can be filled in on-line.

“To get the most accurate results, I need as many volunteers as possible, with some knowledge of the Shetland accent, to take a few minutes to participate and to share their point of view.

“Those taking part will hear recordings of speakers reading the same paragraph, written in the Shetland dialect and have to decide if they consider the speaker to be a native Shetland dialect speaker or a speaker who has moved to Shetland and has either picked up the dialect or is attempting to mimic the dialect.

“All speakers live in Shetland and those who I have classed as ‘real’ considered themselves to speak in dialect while those I classed as ‘fake’ did not.”

The survey can be accessed at http://tinyurl.com/lfzayan and Kerry will use the results as a basis for further research into the Shetland dialect.