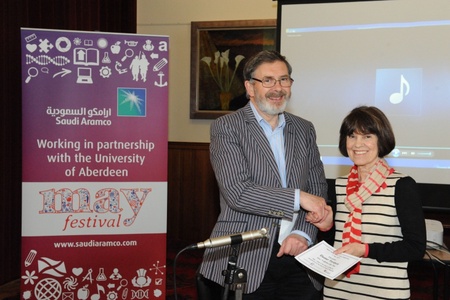 A retired English teacher has given a lesson in creative writing - scooping a literary award and £500 prize for the second time.

Eleanor Fordyce, who taught at Forfar Academy for more than 30 years, was awarded the 2014 Toulmin Prize at a special event at the May Festival.

Organised by the Elphinstone Institute, University of Aberdeen , the Toulmin Prize has been running since 2008 and commemorates the work of John Reid – otherwise known as David Toulmin – one of the finest and best-known exponents of written Doric.

Since it began in 2008, Eleanor is the only person to win the Toulmin Prize twice, first in 2009 with her work ‘Sae Mony Summers’ and this year with ‘A Quine Like You’.

Eleanor said: “I had been teaching English and reading other people’s writing for many years but in a busy job you don’t get many opportunities to write.

“When I retired I joined the Angus Writers group where I received great support and I started writing both short stories and poetry.”

Her winning tale, ‘A Quine Like You’, tells the story of a relationship between a small child and an old lady who are dealing with loss in different ways.

Eleanor, who now lives in Lunanhead, near Forfar, said she drew on her roots in rural Aberdeenshire to pen the piece.

It's great to see Eleanor back on the podium - a great chance to celebrate Eleanor's efforts, writing in Scots, and work of David Toulmin in the prominent setting of the May Festival." Dr Tom McKean

“I was brought up in the North-East and my parents still live in the area so I’ve always identified closely with the Doric dialect,” she added.

“I write in both English and Doric and I’m never quite sure how my mind tells which it should be!”

Eleanor was presented with the Toulmin Prize at an event at the May Festival, on Sunday May 11, where her work was read by poet, writer, and storyteller Sheena Blackhall.

Fordyce added that she was honoured to receive the Prize, which consists of £500 and publication in the Leopard magazine, for a second time.

“Obviously when you enter competitions you hope your work will be good enough to win but it is always a surprise when you find out,” she added.

“It was a privilege to hear Sheena Blackhall bring the words to life and to be part of the May Festival again.”

Dr Tom McKean, acting director of the Elphinstone Institute at the University of Aberdeen, said: “Once again, we’re very pleased to be running the prize, thanks to a generous benefactor, and we’re delighted with the popularity of the Prize, too, with more than thirty entries this time around.

“It’s great to see Eleanor back on the podium – a great chance to celebrate Eleanor’s efforts, writing in Scots, and work of David Toulmin in the prominent setting of the May Festival.”