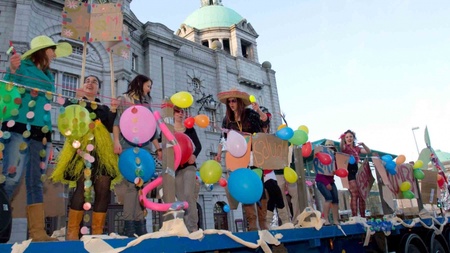 On Saturday, May 3rd, Aberdeen City Centre will witness the 125th edition of the annual Torcher Parade.

The Parade, started in 1889 by nurses from Aberdeen Royal Infirmary, is Europe’s largest student-led parade and raises thousands of pounds for local charities every year.

The floats of the parade are traditionally built on the morning of the parade by student groups and societies from the University of Aberdeen, Robert Gordon University and the North East Scotland College, as well as other organisations.

Themes this year include Disney’s Frozen, the Lego Movie and Marvel Superheroes.

Run by students since the 1920s, the parade has been a long-standing tradition in Aberdeen. Organised by the Aberdeen University Students’ Association Raising And Giving Campaign, it contributes money to organisations such as Aberdeen Cyrenians, who this year will receive £3,000 for a new fridge and two new freezers to support the homeless in Aberdeen,

A further £4,675 will be donated to CLAN Cancer Support to help run its aqua detox sessions for those affected by a diagnosis of cancer.

I am very excited for this year's Torcher Parade. We look forward to donating a lot of money to charities this year and this parade will help accomplish that." Emily Beever, AUSA President for Charities and Community

Emily Beever, the parade’s organiser and President for Charities and Community for the Students’ Association said: “I am very excited for this year’s Torcher Parade. We look forward to donating a lot of money to charities this year and this parade will help accomplish that.”

Organises take four months every year to organise the event. Floats are built on the back of trailers donated by local transport companies including Colin Lawson and ARR Craib.

Spectators of the parade tend to donate money in form of coppers (1p and 2p coins), and the process of counting these takes volunteers more than a week.

Over 100 volunteers are required on the day to ensure the smooth running of the parade.

The parade starts at 6.30pm from Gallowgate and will travel over School Hill, Rosemount Viaduct, Skene St, Carden Place, Queen’s Cross (where the torches will be lit) down Albyn Place, Alford Place and finally onto Union St.