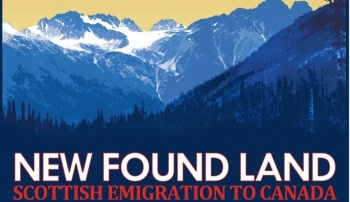 2014 marks 100 years since the death of a former Forres Academy pupil, who became 'the foremost example of the Canadian rags-to-riches story'.

Donald Alexander Smith, ennobled in 1897 as 1st Baron Strathcona and Mount Royal, rose through the ranks of the Hudson’s Bay Company from lowly apprentice to governor of the entire fur-trading enterprise.

In the centenary year of his death, the University of Aberdeen will hold an exhibition dedicated to those who, like Smith, set sail for Canada in search of a new life. New Found Land, which launches today (May 2) and will form part of the May Festival, uses items from the Special Collections to illuminate stories of emigration from north-east Scotland to Canada.

Donald Smith joined the HBC in 1838, after being inspired by the adventures of a fur-trading uncle. He moved on from his first job, counting musk-rat skins at Lachine warehouse near Montreal, to spend twenty years in Labrador, before eventually scaling the heights of the Company’s management.

He helped to broker the transfer of the Company’s vast territories to the Canadian government, and his investments in land, banking and railways brought him wealth and influence. Such was his status, that in 1885 he was given the honour of hammering the last spike into the Canadian Pacific Railway track at Craigellachie in British Columbia’s Rocky Mountains.

Professor Marjory Harper of the University’s Department of History believes that Strathcona represented the pioneering spirit that the New Found Land exhibition aims to capture.

“He is a relatively well-known and exceptionally successful example of the wanderlust which over the centuries has propelled Scots to all corners of the world,” she said.

“In the centenary year of Strathcona’s death, and in Scotland’s second Year of Homecoming, it seems appropriate to host an exhibition dedicated to those who sought new homes or careers in one of the most consistently popular destinations for Scottish emigrants, not least among those who left the north-east.

“Drawing on resources from the University’s treasure trove of Special Collections, the exhibition will provide an insight into the experiences, not only of the rich and famous, but also of ordinary, anonymous individuals and families who settled or sojourned in Canada.

“Donald Smith’s life has been described by one biographer as ‘the foremost example of the Canadian rags-to-riches story’. While he did not come from a totally impoverished background – his father was a merchant and Donald’s first job was with a legal firm in Forres – Canada opened up opportunities which would have completely beyond his reach in Scotland.”

New Found Land will give a voice to emigrations stories like Smith’s and the many others who sought adventure or sanctuary beyond Scotland’s shores.

Other north-east pioneers who feature in the exhibition include William Scott, from Achath in Aberdeenshire, who emigrated to Upper Canada in 1835 building up cluster farms and mills that formed the basis for the village of New Hamburg, west of Toronto.

It will also feature the story of John McBean, a farm labourer who became an agricultural journalist, whose fluent letters held with the Special Collections offer unusual insight into the environment of these new settlers.

Professor Harper added that in keeping with the spirit of ‘homecoming’, emigrants such as Smith retained close ties to their homeland.

“Shrewd investments helped Smith to become a self-made millionaire. His starting salary was £20 a year, but he died as Canada’s richest man, worth $5.5 million. He was a generous philanthropist, whose donations and bequests amounted to more than $7.5 million.

“He did not forget Scottish causes and beneficiaries included the University of Aberdeen and he funded the building of Leanchoil Hospital in Forres.

“Smith’s personal tastes were simple – he claimed that porridge was his favourite meal – but at his Montreal mansion he hosted lavish dinner parties, entertaining dignitaries from both sides of the Atlantic.

“Back in Scotland in 1894, Lord Strathcona acquired an estate in Glencoe. There he built a mansion house, equipped it with electricity and central heating, and landscaped the grounds in an attempt to remind his homesick Canadian wife of the woods and lakes of her native land.”

New Found Land opens today (May 2) and runs until August. A public programme of events and activities for all ages accompanies the exhibition and will be launched in time for the University’s May Festival, which opens on May 9.

Other highlights of the exhibition include a rare list of passengers who sailed for British North America from the Highlands in 1790, a Métis fiddle and a pamphlet produced to show ‘how and where British money and brains may best be employed’, which includes an introduction by Lord Strathcona.