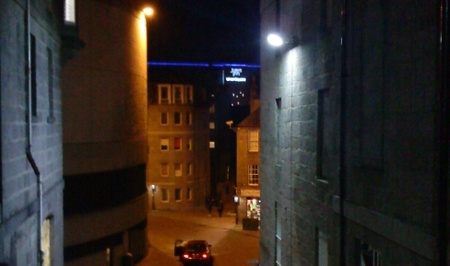 A renowned photographer will help members of the public to capture new perspectives on the city of Aberdeen using only their mobile phones at the May Festival.

Independent documentary and fine art photographer, John Perivolaris, will host Material City at the Festival, organised by the University of Aberdeen and running from May 9 to 11.

The event will see members of the public attend a workshop and briefing session on Friday (May 9) before heading out around the Granite City for the next 24 hours with their camera phones.

The submitted entries will then be displayed electronically and digested at a follow-up session on Sunday (May 11).

A further 12 places for Material City – which is free of charge but must be booked in advance – have just been released by the May Festival team but are expected to book up quickly.

Organiser Edward Welch, from the Centre for Visual Culture at the University of Aberdeen, said the event aims to give those attending a fresh perspective on photographing the urban environment around them, rather than to teach technical skills.

He said: “Aberdeen is an extremely interesting city in terms of its history and architecture but when we live in a place and see it every day we often fail to fully engage with it.

“Material City aims to give those taking part a fresh perspective on how to capture striking visual images of the urban environment.

“This is a great opportunity to work with a leading photographer in this field who has worked in urban environments all over the world.

Material City aims to give those taking part a fresh perspective on how to capture striking visual images of the urban environment." Professor Edward Welch

“We have asked people only to bring a camera phone as we want the event to be accessible and to keep the technical side to a minimum. Instead it is about how to view the city we live in through fresh eyes.”

Professor Welch added that Aberdeen has a huge amount to offer when it comes to variety in urban landscapes.

“We called the event Material City because we really want people to think about the materials used around them that we generally take for granted.

“Aberdeen is an ideal location for this as it has so many different layers of history in a relatively small space – ranging from traditional fishing villages and ancient seats of learning, to Victorian granite, post-war concrete and the buildings of the ‘oil boom’.

“All this combines to make for a complicated and fascinating urban environment with many striking features and we are looking forward to seeing the images captured through Material City.”

Following the Friday briefing session, participants will be asked to plan a route through the city they don’t usually take – or to walk their usual route in a different way.

Organisers will be at different points around Aberdeen at set times on Saturday to meet those taking part who want to get additional tips or advice, and on Sunday, between 2pm and 3pm, a follow-up session will be held at the University of Aberdeen to discuss the experience and photographs submitted.

It is hoped that the shots taken as part of Material City will be used to form the basis of an exhibition exploring Aberdeen’s urban environment.

Places at the event can be booked at www.abdn.ac.uk/mayfestival or by phoning Aberdeen Box Office on 01224 641122.