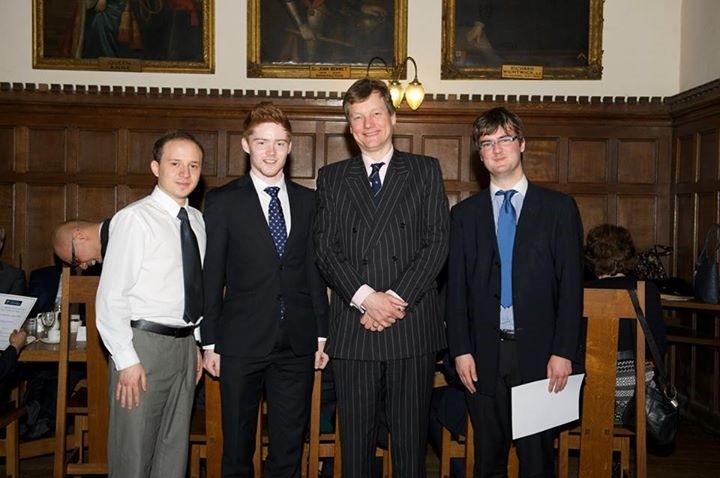 Students from the University's Law School enjoyed success at a recent mooting competition - submitting the best written entry of any European team.

The team of three were invited to take part in the Oxford Intellectual Property Moot at the University of Oxford last month.

The group was made up of Lucas Clover Alcolea, Petru Mircea Stanescu and Philip Shorney. The trio are the first students to represent Aberdeen in the competition in recent times.

The Oxford IP Moot is an international competition consisting of both written and oral rounds with participation in the latter by invitation only, based upon two written submissions prepared by teams wishing to compete.

The team’s written submissions were judged to be the best of any UK or European team, receiving joint third prize for Best Written Submissions, behind the Universities of Ottawa and Singapore.

The group were supported by Terra Firma Chambers.

Dr Abbe Brown said: “I am absolutely delighted that the team did so well at Oxford. This is an extremely prestigious competition and we are all very proud of Lucas, Petru and Philip for doing so well.

I am absolutely delighted that the team did so well at Oxford. This is an extremely prestigious competition and we are all very proud of Lucas, Petru and Philip for doing so well. " Dr Abbe Brown

“The team received fantastic support from Terra Firma and all three are extremely grateful to them for sponsoring them, which in enabled them to take part. I would also like to thank Dr Patrick Masiyakurima, Dr Susan Stokeld and Derek Auchie from the University who all helped the team prepare.”

Taking part in the competition has proven valuable to the participants. Lucas Clover Alcolea, who is in the final year of LLB (Hons) said: “I think the two most important things we have learnt from this experience are that the law is not a fossilised mammoth to be kept in a museum but rather a vibrant and evolving living thing and that the question is not always so much what the law is but what the law should be. Secondly, that hard work, determination and teamwork pay off in the end, even if it’s a long hard slog to see the light at the end of the tunnel!”

Petru Mircea Stanescu, who is studying LLB Law with German, added: “Taking part in such an international competition was truly a one of a kind experience. We’ve met IP law professionals who talked about their career and experience, engaged in stimulating conversations with the judges and all the other teams about the current issues in copyright law and met people from all over the world who share our passion for advocacy.”

Philip Shorney, who is also in the final year of the LLB degree, is pleased that the team’s hard work paid off.

He said: “We prepared for the moot by meeting in the Taylor Law Library very regularly – almost daily. Once we were happy with the research, we constructed arguments around this collection to create a final written piece for the first stage of the competition.

“Following our success in the written rounds, we endeavoured to improve our arguments; anticipating the strong opposition that we would be up against.

“Armed with our research, the advice we had been given and ten folders of authorities we were ready to take on the competition.”