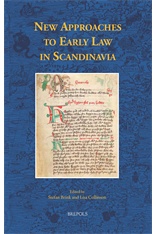 Publication of a volume of articles co-edited by Pathways to Power: The Rise of the Early Kingdoms of the North team members Professor Stefan Brink and Dr Lisa Collinson.

The volume is the third in the Acta Scandinavica series published by Brepols, an international academic publisher of works in the humanities, founded in 1796.

During recent years, there has been a revival of interest in the early laws of Scandinavia. In this volume several aspects of this field are presented and discussed.

The collection begins by exploring the introduction and development of the næfnd in medieval Denmark, a kind of ‘jury’ which replaced the ordeal. The focus then moves to Sweden and Norway, with an analysis of the Hälsingelagen, and a comparison of the kristindómsbálkr (‘Ecclesiastical Law Section’) of the town law of Trondheim (Niðaróss Bjarkeyjarréttr) with the provincial law of medieval Trøndelag, Frostuþingslög.

A further article explores how violence and homicide involving laymen and clerics was handled in late medieval Norway, drawing on the recent discovery of register protocols of the Penitentiary at the Papal Curia. The documentary aspects of law are examined through an analysis of the Äldre and Yngre Västgötalagen from existing manuscripts, in an attempt to discover the source of the initiative to write the laws down.

A further study explores several words for ‘outlawry’ in Old Scandinavian languages. This volume also provides a general theory of legal culture to show how the introduction of three new elements into Norwegian legal culture (norm-producing, large-scale lawmaking; conflict-resolving juries; equity as idea of justice) led to a major change in legal culture in medieval Norway. Finally, the book looks at the development of penal law in Denmark in the Middle Ages, attempting to explain that development in the light of both domestic conditions and foreign influence, especially from Sweden and Germany.