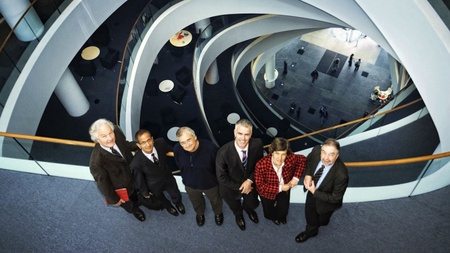 Growing strength in computing sciences, including the application of Natural Language Generation (NLG), and the creation of a critical mass which will grow clusters of Information Communications Technology (ICT) companies in the North-east of Scotland has resulted in the University being shortlisted in  the category Demonstrating Knowledge Transfer in ICT.

NLG is a form of artificial intelligence which communicates information extracted from complex data sources in natural language, automatically generating written reports in potentially any language.

Aberdeen hosts one of the longest standing and largest groups of NLG researchers in the world. The University’s NLG spinout company Data2Text was acquired by commercialisation specialist Arria last year, with the resulting company Arria NLG floated at the end of November on the Alternative Investment Market and currently valued at £150 million.

Developing ambitious solutions to big data challenges is difficult for many small businesses. To address this, the University started the Aberdeen Software Factory – a student-run software house that sees students developing applications to can gain experience working on larger, commercial software projects under the supervision of their course organiser. There is also a new MSc in Software Entrepreneurship. The Aberdeen Software Factory is attracting increasing enquiries and has to date delivered 10 assignments.

Dr Liz Rattray, Deputy Director of Research and Innovation who led the submission, said: “The University’s long history of spinout companies and business engagement was recognised in our ranking 6th in the UK in the Praxis Unico Spin Out Annual Survey 2013. Success has been built predominantly from the life sciences, and this is tremendous recognition that computer sciences are also becoming a very strong area for us in knowledge exchange through working directly with industrial partners.”

This is tremendous recognition that computer sciences are also becoming a very strong area for us in knowledge exchange through working directly with industrial partners." Dr Liz Rattray

The second shortlisting goes to the University’s award-winning partnership with Robert Gordon University and the North East Scotland College on the £1.5 million carbon and cost-saving North East of Scotland SharedData Centre, which is nominated for Departmental ICT Initiative of the Year.

This highly complex and high risk project involved major construction work and detailed planning to upgrade the live primary data centre at the University of Aberdeen (re-locating all 500 servers at this University alone), installing critical monitoring systems and housing core services from the other partner institutions while at the same time operating business as usual.

Operational in 2013, the North East Scotland Shared Data Centre has already scooped several national awards including the Universities and Colleges Information Systems Association (UCISA) 2013 Award for Excellence, which recognises best practice of IT use in the tertiary education sector. It has also secured a prestigious Green Gown Award, a British Computing Society UK IT Industry Award, and the project was also named Data Centre Project of the Year in the BCS & Computing UK IT Industry Awards – covering the UK’s entire IT industry and beating off competition from Tesco, Capital One and the NHS.

This major collaborative project has resulted in all three institutions replacing their data centres with a new shared facility on the University's Old Aberdeen campus. A secondary centre is now being created on the RGU campus at Garthdee, which will enable further carbon reduction and financial savings.

Project Sponsor and Chair Brian Henderson, Head of Service Management for IT Services, said: “We are delighted to be shortlisted in these prestigious national awards for the innovative work and powerful results that have been achieved through this unique collaboration with our colleagues at RGU and North East Scotland College.”

The winners of this year’s Times Higher Education Leadership and Management Awards will be revealed at an event in London on Tuesday 17 June.