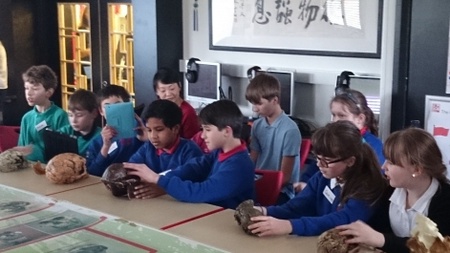 School children from Aberdeen and Angus have been getting hands-on with archaeology through an initiative sponsored by the University of Aberdeen's Confucius Institute.

Visiting professor Fa-Jun Li, an Associate Professor in the School of Sociology and Anthropology at Sun Yat-Sen University, Guangzhou, travelled to local primary schools to talk about human development and Chinese archaeology.

He delighted pupils at Danestone Primary School in Aberdeen and Hayshead Primary in Arbroath with timelines of history, pictures of exciting archaeological finds, and hands-on examination of (mostly replica) human skulls.

The schools used Professor Li’s visit as the impetus to hold China days, where students learned not just about Chinese archaeology, but also about its language and culture.

In addition to school visits, Professor Li, who is also Vice-Director of the Sun Yat-Sen University’s Centre for Health and Human Development, gave a public lecture, ‘New Ideas from Old Bones’, outlining the scope of Chinese archaeology and theories of human development.

That such a prominent Chinese archaeologist was able and willing to share his knowledge was a highlight of the first year's activity of the Confucius Institute in Aberdeen." Professor Barbara Fennell

He also held a specialist seminar hosted by Professor Keith Dobney, Chair in Human Palaeoecology of the Department of Archaeology at the University of Aberdeen.

The Confucius Institute of the University of Aberdeen was established in September 2013, to act as a linguistic and cultural bridge, promoting knowledge exchange between China and the people of North East Scotland and serving as the first port of call for information on China.

“That such a prominent Chinese archaeologist was able and willing to share his knowledge was a highlight of the first year’s activity of the Confucius Institute in Aberdeen and sets the standard for further interaction with novices, experts and the general public.

“The feedback from schools was that pupils got a lot out of the visit and we enjoyed seeing them learn about human evolution and Chinese culture in new ways.”