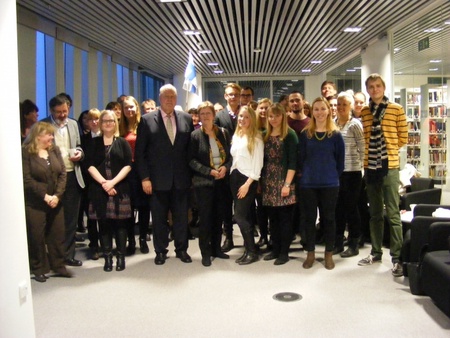 Finland's Ambassador to the UK, His Excellency Pekka Huhtaniemi, met Finnish students enjoying their studies in Aberdeen, together with researchers working on projects focused on the circumpolar North.

Ambassador Huhtaniemi was welcomed to the University by Vice-Principal Professor Albert Rodger. The University has around 145 Finnish students.

Leading a seminar on ‘The North’ was Professor Tim Ingold, Professor of Social Anthropology and Leader for the University’s Interdisciplinary Research Theme on ‘The North’. Professor Ingold has carried out ethnographic fieldwork with Saami and Finnish people in Lapland, and has written on reindeer herding and husbandry, rural economy and the consequences of post-war resettlement and migration in northern Finland. A fluent speaker of Finnish, Ingold was Professor of Cultural Anthropology at the University of Helsinki in autumn 1986, and delivered the Westermarck Memorial Lecture in 2013.

Professor Ingold was joined by Dr Alex King, Senior Lecturer in Anthropology, whose research interests are in symbolic/linguistic anthropology, the political use of culture, performance, narrative, descriptive grammar and language documentation. Dr Anders Widfeldt, Lecturer in Nordic Politics, also shared his research on the politics of the right-wing extremism in the Nordic countries, including Finland.

From the School of Law, lecturer Dr Tamas Gyorfi spoke about a research collaboration including the Universities of Turku and Tampere, as well as Örebro University, Sweden. Also taking part was Dr Abbe Brown, Deputy Head of the Law School, who has been appointed to the Law Panel of the Academy of Finland.

From the School of Education, Professor Gabrielle Ivinson spoke about her ground-breaking work on Gender and Education with Professor Elina Lahelma (University of Helsinki).

Professor Ian Russell, Director of the Elphinstone Institute, spoke about ethnological and ethnohistorical research on the musical and oral traditions of Scotland, the North Atlantic and Baltic regions, with close links to the University of Turku and the Kalevala Institute.

From the School of Biological Sciences – Oceanlab, Anni Makela comes from Finland and is currently a PhD researcher in the programme FAR North: Fragility, Adaptation and Resilience to Rapid Climate Change in the North (one of four programmes funded by the University under the ‘North’ theme). Her project title is: ‘Diversity and function of Arctic benthic ecosystems and their resilience to climate change’.

Today the circumpolar North is regarded as an observatory for changing relations between human societies and their environments. Aberdeen is the principal centre for northern research in the UK through disciplines including anthropology, archaeology, geography, literature, music and history, and the University’s historic collections contain a wealth of items of northern significance. The University seeks to work with other centres across the northern world to enhance global understanding and policy for this fragile and sensitive region of the world.