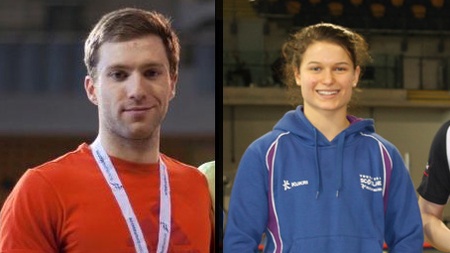 The hard work of two University of Aberdeen athletes has been rewarded after they were named in the full Scotland team for this weekend's International Match in Glasgow.

Zoey Clark and Stephen Dunlop will make history as part of the first Scottish team ever to take part at the event where they’ll face Great Britain & NI, USA and a Commonwealth Select team.

Stephen will compete in the men’s 60m the after winning the same event at the Scottish open indoor championships this weekend. Zoey has won a place on the women’s 4x400m relay squad alongside world bronze medallist Eilidh Child.

Stephen Maguire, the scottishathletics Director of Coaching, said: “It will be a massive experience for the Scotland team.

“It will be a sold out Emirates Arena and gives the team an opportunity to compete in front of a Scottish crowd and that is great preparation and that’s the way I’m looking at it.

“The Scotland team gives the event a different dynamic. When you actually sit down and think about it, you look at the likes of Laura Muir, Eilidh Child, Chris O’Hare, they are as good as anything in the US or the British teams.

“Then you start picking through the events and you think, ‘You know what? We need to go in with the attitude of doing the best we can, our top athletes absolutely challenging and the younger athletes benefit from the experience’.”

Both Stephen and Zoey will jet out to Orlando, Florida for warm weather training, supported by Hydrasun Athletics Academy, on March 20. Whilst there, they will hope to open their summer season by competing in some of the Florida race meets in advance of the BUCS Outdoor Championships in May and Commonwealth Games final selection on the June 9.