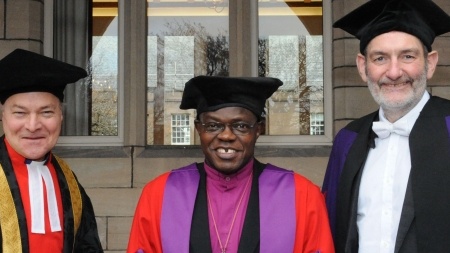 The Archbishop of York is among those being honoured by the University of Aberdeen at its Winter Graduations taking place later this week.

The Most Reverend and Right Honourable Dr John Sentamu, who became Archbishop of York in 2005, will be given the degree Doctor of Divinity on Thursday morning. Archbishop Sentamu will preach at Choral Evensong in King’s College Chapel that day at 5.15pm, to which all are welcome.

Professor Sir Ian Diamond, Principal and Vice-Chancellor of the University of Aberdeen, said: “We are delighted that the Archbishop of York, Juliette Paton, who has tirelessly done so much for so long for charity, and the inspirational Karen Darke, who has triumphed over so much adversity, are all joining the University family.”

More details of the University graduands and their graduation ceremonies follow:

Dr John Sentamu has been Archbishop of York since 2005. Prior to York, the Archbishop served as Bishop of Birmingham from 2002, having previously been Bishop of Stepney. He has also served for over seventeen years as a parish priest and as chaplain to both a young offenders institute and a Cambridge College. Born and brought up in Uganda, Archbishop Sentamu, studied law and is an advocate of the High Court of Uganda. He subsequently studied theology at Cambridge and was ordained. He was made Bishop of Stepney in 1996. Archbishop Sentamu was on the General Synod from 1985 to 1996 and again from 2002. He was also a member of the Archbishop’s Advisory Group on Urban Priority Areas from 1986 to 1992 and of the Revision Committee for the Ordination of Women to the Priesthood. He was Chairman of the General Synod’s Committee for Minority Ethnic Anglican Concerns between 1990 and 1999. He was an adviser to the judicial inquiry into the murder of Stephen Lawrence and also chaired the review into the murder investigation of Damilola Taylor. He chaired the National Screening Programme for Sickle Cell and Thalassaemia from 2001 to 2013. He is a member of the House of Lords and a Privy Councillor.

We are delighted that the Archbishop of York, Juliette Paton, who has tirelessly done so much for so long for charity, and the inspirational Karen Darke, who has triumphed over so much adversity, are all joining the University family." Professor Sir Ian Diamond

A keen runner and mountaineer, Karen Darke was paralysed in a traumatic rock-climbing accident on a Scottish sea cliff at the age of twenty-one. An experience recounted in the opening chapter of her best-selling book ‘If You Fall’, it marked the beginning of an extraordinary life. Over the last decade Karen Darke has overcome many physical and mental barriers, completing many trips others believed impossible; from marathons and triathlons, to kayaking, sit-skiing and hand-cycling in some of the most inhospitable places on the planet. These trips have included a remarkable crossing of the Tien Shan and Karakoram mountains of Central Asia on a hand bike in 1997 (raising £12,000 for charity), hand-cycling the length of the Japanese archipelago in 2000, sea kayaking a 1200 mile length of the Canada – Alaska coastline in 2003, crossing the Indian Himalaya by hand-cycle in 2006 and skiing the Valle Blanche on a sit ski. Her most impressive feat to date was a ground-breaking 600 kilometre traverse of the Greenland ice cap, a month long journey across one the world’s last great expanses of wilderness. As a competing hand cyclist, her achievements to date also include winning two Silver Medals at the 2011 Para-Cycling World Cup in Sydney, Australia, in both the women's H2 Road Race and Time Trial events and a Silver Medal at the London 2012 Paralympic Games in the women's H1-2 time trial. Looking forward to the 2016 Games in Rio de Janeiro, she is currently in training with the British Cycling Team.

Degree of Master of the University

Juliette Paton has been a longstanding volunteer for North-east charities over a sustained period. It was not until 2010, through the Institute of Fundraising, that her efforts had any form of recognition. She has volunteered with CHILDREN 1ST for over 20 years and in that time has raised over £1,500,000 for vulnerable children in Scotland. She has fully supported the organisation’s vision of a happy, healthy, safe and secure childhood for every child and young person in Scotland. With over 125 years’ experience of working with children and families, previously as the Royal Scottish Society for Prevention of Cruelty to Children, the charity supports families under stress, protects children from harm and neglect, helps them to recover from abuse and promotes children's rights and interests. To aid this work, Juliette Paton has been the driving force behind the Touch of Tartan Ball. In its 25th year the Touch of Tartan Ball has achieved significant levels of income. It remains one of Aberdeen's most prestigious charity events and one of the biggest fundraisers in Scotland. In addition to this she has also been Chair of the Aberdeen Action Group which organises numerous events in the area.