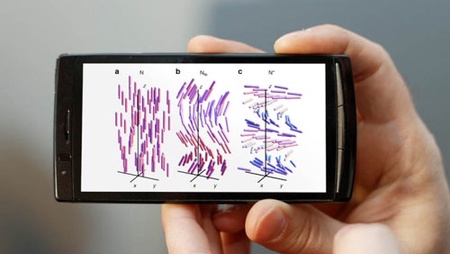 New and improved energy efficient digital screens as well as improved TV images could be just some of the benefits of a new discovery in the field of liquid crystals, which chemists from the University of Aberdeen have been involved with.

Since the beginning of the 20th century only three nematic phases have been identified. It's tremendously exciting to be involved in the identification of the fourth. " Professor Corrie Imrie

Liquid crystals are a technology that impacts on almost everybody, used as they are in devices such as mobile phones, computer screens and televisions. The vast majority of these devices use nematic liquid crystals.

Nematics are similar to conventional liquids, in which molecules are randomly oriented, but with a crucial difference. The molecules are preferentially ordered in one direction but when electrical fields are applied, they can be switched to another direction and act as shutters which can either let light through, or not.

The discovery of another kind of nematic phase three years ago by researchers from Dublin and Hull, and later identified by a team led from Southampton, was particularly exciting - not least because the new nematic phase can be switched much faster than the conventional nematic phase raising the possibility of much more energy efficient displays.

A large international research effort to understand the structure of the new nematic phase saw an interdisciplinary team of researchers assembled involving chemists at the Universities of Aberdeen and Hull, physicists at the Liquid Crystal Institute at Kent State University, USA, and electrical engineers at Trinity College in Dublin.

The team has now reported the structure of the new phase in the latest issue of Nature Communications.

The team found that the molecules are arranged in a ‘twist-bend’ structure with a periodicity of ~ 8nm - the length of two to three molecules, about 10 000 times smaller than the thickness of a human hair.

A technique called transmission electron microscopy was crucial to identify the new structure. The studies showed arch-like structures and periodic arrays, which are not observed for conventional nematics, but are typical for this new liquid crystal phase.

Professor Corrie Imrie, Chair of Chemistry at the University of Aberdeen said: “Since the beginning of the 20th century only three nematic phases have been identified. It’s tremendously exciting to be involved in the identification of the fourth.

“This new twist-bend nematic phase not only has fascinating properties which provide a demanding test of our fundamental understanding of condensed systems, but also has very real application potential.

“These applications could be anything from really impressive fast switching display devices such as far improved colour TV screens and could even have benefits for biological sensors.”