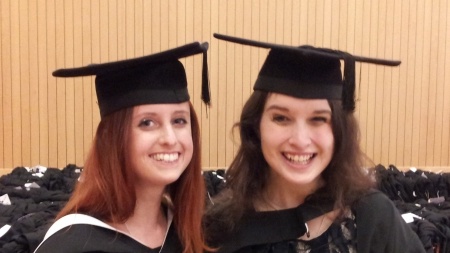 Two University of Aberdeen graduates were thrilled to discover that work they completed as part of their course came first and second in an international essay-writing competition.

Gioia Barnbrook and Hannah Gray were placed first and second respectively in the Animals and Society ASI-WAS Undergraduate Paper Prize in Human-Animal Studies, beating off competition from across the world.

As part of their fourth year More than Human class, the Anthropology graduates created projects that dealt in some way with human animal relations and were encouraged to look at this using media sources.

For her winning piece, Gioia explored how people respond to wildlife films and how society thinks about animals and our relationships with them. She examined a YouTube clip from the documentary ‘A Lion called Christian’.

Gioia, who is originally from Birmingham, was delighted when she received the news, rounding off an impressive time at University, also scooping the Anthropology department’s prizes for best student and best dissertation.

She said: “"I was surprised - but thrilled - that my paper did so well. How we think about and treat animals is such an important issue, so it is great to have been given the opportunity to explore this, both at Aberdeen and in the ASI-WAS competition."

Hannah, from East Lothian, focused on Tim Flach’s animal portraiture photography series for her competition entry and was delighted to be named runner-up having chosen a subject that really caught her imagination.

She added: “I really enjoyed the whole project so the opportunity to submit it for such a prestigious competition was brilliant.”

Dr Andrew Whitehouse from the Anthropology department encouraged both students to enter the competition and was delighted to see the first and second place go to University of Aberdeen students.

He said: “This is the first year that the More than Human has run and it’s fantastic to see Gioia and Hannah respond to the course with such skill and imagination.  For those qualities to be appreciated internationally shows what it’s possible for Aberdeen students to achieve.”