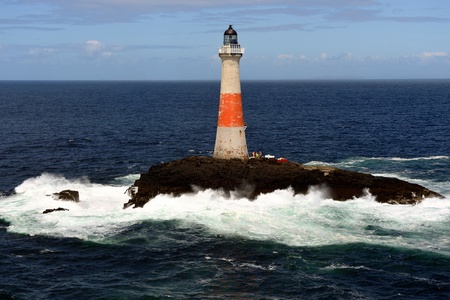 Some of Scotland’s most renowned and remote lighthouses are being showcased in a new photography exhibition hosted by the University of Aberdeen.

For over 150 years Robert Stevenson – father of the famous author Robert Louis Stevenson – and his descendants, pioneered the building of lighthouses across the country.

Ian Cowe, from the University’s Estates section, a lighthouse enthusiast, has spent the last five years travelling around the coast of Scotland capturing photographs of their engineering feats.

With many of the lighthouses standing in remote and hard to reach places, this project has seen Ian travel by foot, car, boat and helicopter, to obtain the images that are now on display in the University’s MacRobert building.

Ian said: “I’ve had an interest in lighthouses since I was a child. I’m originally from Peterhead and my father was a fisherman so there has always been a connection with the sea.

“So choosing lighthouses as a subject matter for my photography was quite obvious.

“Travelling to the lighthouses was quite an experience, due to their unique and at times remote locations.

“On two occasions I travelled with the Northern Lighthouse Board – the organisation responsible for maintaining most of Scotland’s lighthouses. They took me by ship and then helicopter to a couple of the most isolated lighthouses – namely Skerryvore off Tiree and Dubh Artach off the Isle of Mull.

“Photographing these buildings brought home to me not only their beauty, but also the craftsmanship behind how they were created.

“Many are located on pieces of land so remote and at times perilous you can appreciate the battle against the odds and elements that it would have taken to develop them, and tremendous workmanship of the Stevenson family.

“Although Robert Louis Stevenson initially trained as an engineer, he abandoned this trade in favour of writing. He did however accompany his father on inspections of lighthouse construction projects, and this is reflected in one of his most famous novels – Kidnapped – which makes various references to the area around Dubh Artach lighthouse.

“I’m delighted to think this exhibition will provide some members of the public with a chance to see these Stevenson lighthouses, which may otherwise be inaccessible to them due to their geographical remoteness.”

The Scottish Lighthouses exhibition is on display in the MacRobert building on the University’s King’s College Campus and is free to attend.