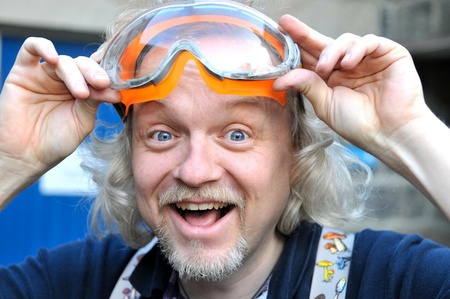 Popular TV scientist Dr Marty Jopson is gearing up for an energy-packed show at Techfest in September next Wednesday (September 25).

The resident scientist from the BBC’s One Show is appearing at the Aberdeen and North-east Scotland’s festival of science, technology, engineering and maths at a special event organised by the University of Aberdeen.

Standing on the Shoulders of Giant: A Story Told with Gravity is Marty’s show at Aberdeen Music Hall which will be a family-friendly delve into how Isaac Newton came up with his ideas on gravity.

As well as touching upon the Ancient Greeks, Marty will also take his science show bang up to date with the hunt for the Higgs boson.

Said Marty: "I can't wait to be back in Aberdeen, the sun always shines when I am in Aberdeen. No really, it's always sunny. Weird huh?

"This is a show all about a personal obsession of mine, namely Isaac Newton. I have a love /hate relationship with the man and wanted to do something that explained his work without resorting to maths and equations. Fear not! This show is an algebra free zone."

As well as being part of the part of Techfest, Marty’s talk is this year’s Music Hall lecture which is an initiative of the University, the British Science Association Aberdeen Branch and Aberdeen Performing Arts.

Dr Ken Skeldon said: “We launched the annual lecture in 2009 as part of the 150th anniversary of Aberdeen’s Music Hall and its close historical links with the British Science Association.

“The University is delighted to be partnering again with the British Science Association Aberdeen Branch, Aberdeen Performing Arts and TechFest on the 2013 event which features one of the UK’s most exciting and inventive popularisers of science.”

Aberdeen’s annual TechFest In September festival runs from September 13 to October 2 with a special 20-day programme of events, workshops and shows to celebrate its 20th birthday. The University of Aberdeen is again one of the largest supporters and contributors to the festival with a host of talks, debates and interactive workshops covering a range of topical issues. A full list of the University’s events can be found at http://www.abdn.ac.uk/engage/public/techfest-206.php.

Supported by joint principal sponsors Shell and BP, the annual festival of Science, Technology, Engineering and Mathematics (STEM), is set to attract around 25,000 visitors of all ages.