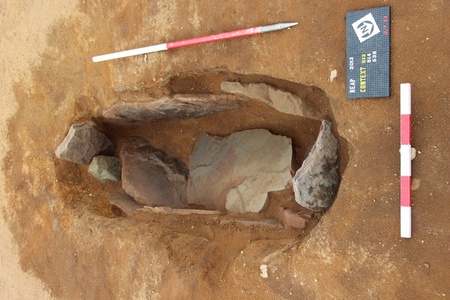 The remains of what could be a member of early Pictish royalty have been discovered as part of an archaeological dig.

The discovery, by experts from the University of Aberdeen and the University of Chester, is one of the first ever made in the North-East of Scotland and was found in a carefully made sandstone grave which suggests the person was of high status.

The Pictish Kingdoms were some of the most powerful players in post-Roman Britain but understanding of their social and political structure is poor due to a lack of historical records.

Rhynie, Aberdeenshire, has long been known for its eight carved standing stones including the renowned ‘Craw Stane’. Previous digs have uncovered rare examples of Mediterranean imports and intricate metalwork which add to the theory that the area was a former Pictish centre of power.

The latest discovery, made during the Rhynie Environs Archaeological Project (REAP), is the first time remains of a body have been uncovered at the site.

“We found elements of the legs, pelvis and jaw bone which we recovered and are now analysing in the lab,” explained project leader Dr Gordon Noble of the University of Aberdeen.

“It’s extremely rare to find any human remains from this era in the North-East of Scotland as the soil in this part of the world is so acidic. One of the graves had been carefully made from split sandstone slabs to create a cist and the stone lining and collapsed capstones helped to preserve skeletal material.

“Unlike Anglo-Saxon areas to the south, the tradition in Scotland was largely for unfurnished burial so we didn’t expect to find rich grave assemblages.

“The nearby presence of the settlement near the Craw Stane strongly suggests these may have been burials of high status individuals and that Rhynie was, like other political centres, a landscape of power rather than a series of individual sites.”

The remains will now be studied using radiocarbon and stable isotope techniques, if the level of bone preservation is sufficient.

The Pictish heartlands and main powerbase were long assumed to lie in central Scotland but recent research has suggested the most cited Pictish kingdom, Fortriu, was based in the Moray Firth area and as such the northern Picts may have been major players during this time.

Shards of medieval imported glass from the west of France were also found near the remains during the latest dig at Rhynie.

Dr Meggen Gondek of the University of Chester added: “The imports along with the presence of evidence for fine metalworking, suggest that Rhynie is a high-status site dating to the early stages of the development of the post-Roman kingdoms in northern Europe. The 5th-6th century dates for Rhynie places it in the centuries immediately following the withdrawal of the Roman army from Britain.”

During the dig hundreds of members of the public visited the excavation and the site blog received over 3,000 hits in the two week period.

A Pictish café was organized by a local resident which exhibited artifacts found during the dig and was run in conjunction with a variety of events that promoted the cultural and wider educational aspects behind the dig itself.