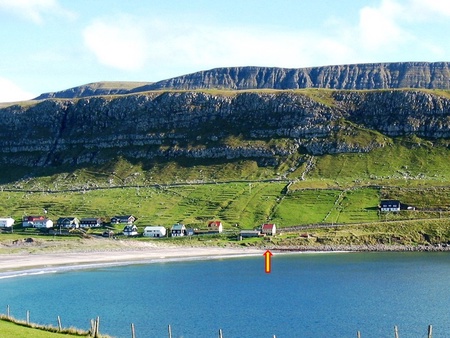 The Faroe Islands were colonized much earlier than previously believed, and it wasn’t by the Vikings according to new research.

The research was conducted by Dr Mike Church from Durham University and Símun Arge from the National Museum of the Faroe Islands along with a series of international collaborators including Professor Kevin Edwards of the Department of Geography and Environment, University of Aberdeen. Results from the multidisciplinary project are published in the journal Quaternary Science Reviews.

The research challenges the nature, scale and timing of human settlement of the wider North Atlantic region and has implications for the colonization of similar island groups across the world.

The Faroes were the first stepping stone beyond Shetland for the dispersal of European people across the North Atlantic that culminated on the shores of continental North America in the 11th century AD, about 500 years before Columbus made his famous voyage.

Research at the archaeological site at Á Sondum on the island of Sandoy showed an extensive windblown sand deposit containing patches of burnt peat ash from human activity, dating human settlement to pre-Viking phases. These ash spreads contained barley grains which were accidentally burnt in domestic hearths. Residues then became spread over the windblown sand surface during the 4th-6th centuries and 6th-8th centuries.

Lead author Dr Mike Church, from Durham University’s Department of Archaeology, said: “There is now firm archaeological evidence for the human colonization of the Faroes by people some 300-500 years before the large scale Viking colonization of the 9th century AD, although we don’t yet know who these people were or where they came from.”

Aberdeen co-author Professor Kevin Edwards adds: “Previous analyses of fossil pollen contained within peat deposits of the Faroe Islands carried out at Aberdeen University had led to predictions of a human presence in the islands several centuries prior to that of the Vikings. This high-precision palaeoecological evidence is now shown to be consistent with the archaeological finds obtained by excavation. Interestingly, there is also a literary observation by the Irish monk Dicuil (c. AD 825), attesting to ecclesiastical anchorites settling remote North Atlantic islands, but the specific identification of the Faroes in the text is a subject of debate.”

The study involved Durham University, the National Museum of the Faroe Islands, the Universities of Aberdeen, Edinburgh, Bradford and Stirling, the Scottish Universities Environmental Research Centre (East Kilbride) and the City University of New York. It was funded by the Faroese Research Council, The Leverhulme Trust, US National Science Foundation, Anadarko Faroes Company and BP Amoco Explorations.