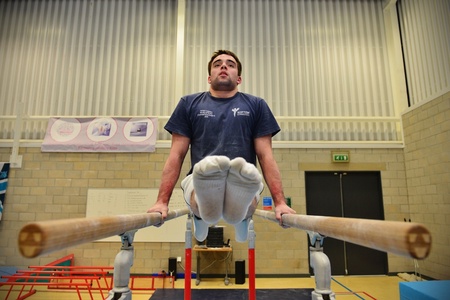 University of Aberdeen student and gymnast Ross Soutar is hoping to keep the sport’s feel good factor going as he puts his studies on hold to target a spot in Scotland’s Commonwealth team for Glasgow 2014.

The 20-year-old has opted to defer the final year of his undergraduate degree in Geology and Petroleum Geology to devote himself to full-time training.

“Trying to balance my gymnastics and university studies has always been a struggle but going into my final year – to try and do both would result in both being diluted,” Ross explained.

“The Commonwealth Games is a massive opportunity that I could risk missing out on if I continued my studies at the same time.

“To have a chance of making the Commonwealth squad I’m going to have to train 35 hours a week, so doing that on top of a dissertation and part-time work just wasn’t feasible.”

Ross, originally from Dyce in Aberdeen admits the prospect of performing in front of a Scottish crowd played a part in his decision to focus all his efforts on gymnastics.

“You saw last summer how much of a difference a home crowd can make so that’s another attractive thing about competing in 2014,” he said.

“Gymnastics is my true passion. I’ve loved it since I started as a child. The opportunity to be part of the Commonwealth Games – especially being in Scotland – I would hate to look back and think, ‘I wish I’d given it a go. I wish I’d taken a year out to give it everything I had’.

“It was a difficult decision to make to defer my final year but I can always go back and complete it. I’ll never get another chance to compete in a Scottish Commonwealth Games. My parents and my coach are fully behind my decision.”

Despite training full-time, Ross knows he will have to be at his best if he’s to win a berth on the Scottish Commonwealth team.

“At the moment I’d say there are around 10 serious candidates to make the Scotland squad for the Commonwealth Games and only five places up for grabs and I put myself in that 10,” he said.

“Two places are already effectively taken by Daniel Purvis (who won a bronze team medal at London 2012) and Daniel Keatings. Both of these guys are superior to the rest of Scotland’s gymnasts, so that narrows it down to only three places realistically.

“It will be a good battle to see who can make it but I have a good chance and I wouldn’t be taking the year out if I didn’t think I could make it. It will be hard because we’re competing for spaces but we’re all good mates as well.”

Ross has gone from strength to strength in recent years since he increased the time he spends training and is now a regular in the Scotland squad. Supported by an Development Trust Sports Bursary from the University of Aberdeen, in February he became a triple bronze medal winner in the British Universities & Colleges Sport (BUCS) Championships in All-round, Vault and Floor events – effectively making him the third best All-round gymnast student athlete in the UK.

Whilst he knows he’ll have to be at his best if he’s to claim a place in the Scotland squad for Glasgow, Ross is confident that if selected he would be able to make an impact on one of the biggest stages.

“I think I could post good scores on pieces of apparatus. I’ve been referred to as Mr Consistent. When I go into a competition nine times out of 10 I’ll hit the routine – I’ve not been making major errors. I was elected as captain for the Northern European Championships for the last two years because it doesn’t matter if I go first or last – I’m going to do a job.

“This year out from studying will allow me to increase the difficulty and increase the scores so I think I can make a huge contribution to the team’s score.

“But there’s a huge amount of work to be done before I can even start dreaming about that. At the minute British Gymnastics is as strong as it’s ever been and there’s a lot of top class athletes involved in the sport.”