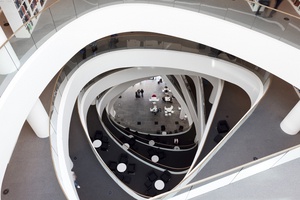 The Sir Duncan Rice Library was named one of the best new buildings in Scotland at the Royal Incorporation of Architects in Scotland (RIAS) 2013 awards last night (Wednesday, June 12).

The library was among 12 buildings recognised for architectural achievement in Scotland, and will now compete for the Andrew Doolan Best Building in Scotland Award.

The library is also one of only five Scottish buildings to have been awarded a RIBA (Royal Institute of British Architects) award.

At a total project cost of £57million the striking Sir Duncan Rice Library provides an advanced learning environment in which the latest learning technology adds value to a magnificent collection of over one million books, archives and manuscripts. In addition, adaptable spaces provide flexibility for individual study, group working, seminars, meetings and public events.

Conceived as a cube evoking the ice and light of the north, the library has a sharp, modern design, and a striking interior of sweeping contours around an asymmetrical atrium which rises diagonally from the ground floor through seven floors above, giving spectacular views of the Granite City and the North Sea.

Professor Sir Ian Diamond, Principal and Vice-Chancellor of the University said: “I am delighted that the Sir Duncan Rice Library has received this prestigious accolade.

“As our most significant project in terms of fundraising in recent times, it is hugely satisfying for the University to have been recognised by the RIAS and RIBA. We were committed to creating an iconic library and a first class  learning and research environment for students, staff, researchers and visitors and to be named as one of the top 12 new buildings in the country highlights all the efforts that went in to its creation.

“I would like to take this opportunity to thanks and congratulate the team at Schmidt Hammer Lassen architects who created the Sir Duncan Rice Library, as in doing so gave us our award winning facility.”

The 15,500 square metre library is a positive example of how architecture can make a difference.

The winner of the RIAS Andrew Doolan Best Building in Scotland Award will be announced on November 7 at a ceremony at the Scottish Parliament.

As a winner of the RIBA National Award, the Sir Duncan Rice Library will also be considered for the RIBA Stirling Prize 2013. The six buildings shortlisted for the Stirling Prize will be announced on July 18, with the winner revealed on September 26.