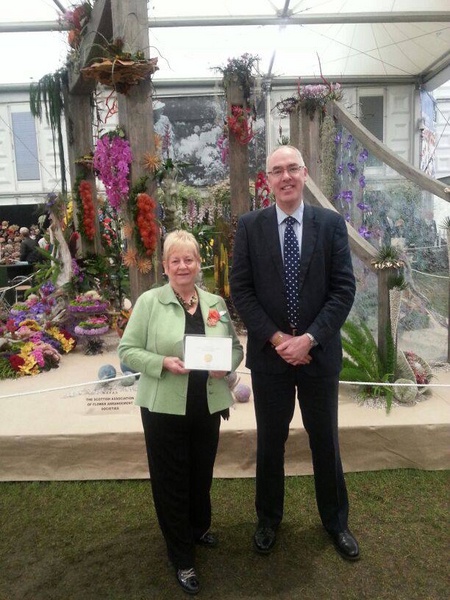 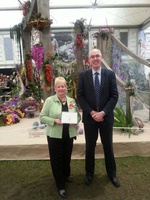 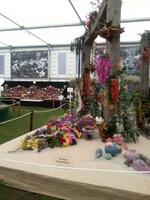 An unusual collaboration between marine chemists at the University of Aberdeen and the Scottish Association of Flower Arrangement Societies (SAFAS) has struck gold at the Chelsea Flower Show.

The Scottish branch of the National Association of Flower Arrangement Societies (NAFAS) enlisted the help of the academics to assist with their Jacques Cousteau-inspired display.

On Tuesday morning the SAFAS team arrived at the Grand Pavilion to discover the coveted gold medal placed on their stand.

“This is a great honour – it’s the pinnacle for us. To win gold at the Chelsea Flower Show is quite simply as good as it gets”, explained SAFAS Chelsea 2013 Flower Show Leader Valerie Davidson.

“The stand was on display as part of yesterday’s opening day but you don’t find out your award until the Tuesday. We came down this morning and there it was! We’re overjoyed.”

The display was visited by experts and celebrities alike on Monday with Joanna Lumley, Nigel Havers and Dragon’s Den star Deborah Meaden all stopping to admire the SAFAS stand.

Entitled Far Below the Sea Blooms, the arrangement attempted to depict coral reefs and other underwater landscapes – hence the involvement of the University of Aberdeen’s Marine Biodiscovery Centre.

Professor Marcel Jaspars’ research focuses on exploring the deepest parts of the ocean in search of new drugs but took time out to meet with the SAFAS team to explain the makeup of coral reefs so that the display was an accurate representation.

“I’d like to offer my warmest congratulations to the SAFAS team, they have done an amazing amount of work to complete this beautiful display and the fact that it is based on a subject so close to my heart is an added bonus,” said Professor Jaspars.

“Sustainability was a key message that both SAFAS and the University of Aberdeen wanted to convey and I think this display has done that fantastically. It also conveys the message that underpins the work we do at the University, which is that reefs are an excellent source of new drugs that can have huge health benefits for the human race.”

This is the first time in 23 years the Scottish arm of the NAFAS has produced the body’s Chelsea Flower Show display.

Valerie Davidson added: “The gold medal is testament to the hours and hours of hard work that have been put in to make this display so special. I’d like to thank every single person who has been involved - all our partners and contributors and of course the University of Aberdeen’s Biodiscovery Centre for all their expertise and guidance.”

Sustainable, harvested, Orkney sea weed fertiliser is being used to propagate and grow on some of the plants and the exhibit will feature many sustainable materials, such as Seacell (seaweed) and Bamboo. Colouring of these fibres was achieved using vegetable dyes and recycled Oyster shell chick grit was used rather than aggregates.

The Royal Botanic Garden in Edinburgh, the Logan Botanic Garden, and Threave Estate Castle Douglas partnered the SAFAS project and much of the plant material was sourced from these gardens.

The University of Aberdeen and The Northern Scotland Local Section of the Royal Society of Chemistry have both donated money to support the display.