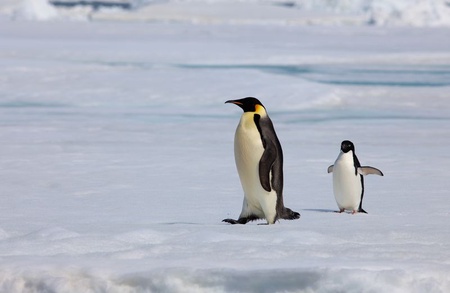 They are known for being a bird that can’t fly but now scientists believe they have worked out why penguins don’t take to the skies.

Their findings have emerged following studies of guillemots - seabirds in the Auk family which closely resemble penguins in their diving and swimming behaviour, but are still able to fly.

The University of Aberdeen was part of an international research team which explored a biomechanical theory - that a wing that is good for flying cannot be as good for diving or swimming.

This is because a wing designed for optimal diving performance is unlikely to be efficient for flying.

Scientists studied how much energy guillemots - on Coats Island, northern Canada - used during flight and when they dived beneath the waves.

Their findings - published today (May 21) in Proceedings of the National Academy of Sciences of the USA - showed that guillemots used substantially less energy than most other birds when they were diving.

Professor John Speakman, who works at the University of Aberdeen as well as the Chinese Academy of Sciences in Beijing, said: “Like many people, I have been fascinated by films of penguins walking across the Antarctic ice, and wondered, why on earth they lost the ability to fly. It is great to be part of the team that has collected the data that resolves this issue.

“Our findings for the energy expended when diving and swimming by guillemots fit exactly into the predictions of the biomechanical model.

“The lack of flight in penguins has been an enigma, because it leads to some seemingly poorly adapted behaviour. Emperor penguins, for example, walk up to 60 km between their rookeries and the sea - a journey taking several days that could be covered in a few hours if they were able to fly.

“Also, many penguins are targets of predators such as leopard seals, at the points where they enter the ocean. This problem could be easily avoided if penguins could just fly over the top of the predators.

“As penguins evolved, their wings became more and more adapted to swimming and diving in the oceans where they catch their food - making this part of their lives very energy efficient.

“However at the same time the energy required for flying became greater and greater for the penguin. At some point, it simply became impossible to sustain the very high energy costs of flight, and the birds became flightless. Presumably the efficiency benefits when feeding offset the inefficiency of having to walk everywhere when they were on land.

“Our studies of guillemots – or Murres as they are known in North America - have now shown that this biomechanical theory is very likely to be correct. Guillemots resemble penguins in their diving and swimming behaviour, but differ in that they are still able to fly. In many respects they are like a modern equivalent to the ancient ancestors of penguins before they lost the ability to fly.”

Kyle Elliott, a graduate student at the University of Manitoba, and first author on the paper, added:  “Clearly, form constrains function in wild animals, and movement in one medium creates tradeoffs with movement in a second medium. Bottom line is that good flippers don’t fly very well.”