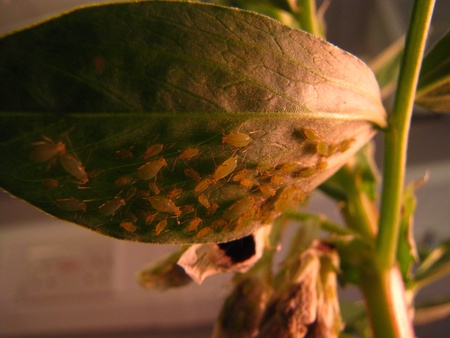 Plants use underground fungal networks to warn their neighbours of aphid attack, UK scientists have discovered. The study, published this week in Ecology Letters, is the first to reveal plants’ ability to communicate underground in this way.

The research, funded by a NERC studentship with Rothamsted Research, changes our understanding of the ways in which living things interact with one another. If crops can be managed in a way that exploits this natural communication channel, it could provide a new weapon in the battle against insect pests.

Scientists from the University of Aberdeen, the James Hutton Institute and Rothamsted Research grew the bean plant (Vicia faba) in groups of five. They allowed three in each group to grow underground networks of mycelia – a thread-like fungus that grows from one set of roots to another. They kept the two remaining plants free of the fungal links.

They then infested one of the plants in each group with aphids, triggering the release of a suite of chemicals designed to repel aphids but attract wasps, one of the aphid’s predators.

Remarkably, plants which were not under attack themselves, but which were connected to the victim by the underground fungal network, also began to produce the defensive chemical response. Unconnected plants didn’t mount a chemical defence, so remained vulnerable to aphid attack.

Previous research had shown that plants could communicate chemically through the air, but the researchers covered the plants with bags to rule out above-ground signalling.

Dr David Johnson, of the University of Aberdeen, led the study. He says:

“We knew that plants produce volatile chemicals when attacked, and we knew they communicate danger to each other above ground. Now we know that they communicate danger through these underground fungal networks as well. Connected plants that weren’t infested by the aphids behaved as though they were. We don’t quite know the mechanism, but it’s likely to be a chemical signal.”

The roots of virtually all groups of plants, including important food crops such as wheat, rice, maize and barley, are colonised by symbiotic fungi.

Another of the study’s authors, Professor John Pickett of Rothamsted Research, an independent research institute strategically funded by the BBSRC, says:

“Aphids affect all higher-latitude agricultural regions, including the UK, the EU, North America, and North East Asia. This research could provide a new, sustainable and natural intervention. In a field of plants that have some inducible resistance to aphids, we could use a plant that’s susceptible to aphid attack to ‘switch on’ the defence mechanism through the natural underground connection. There’s the potential to deal with other pests and diseases, in other regions, in a similar way.”