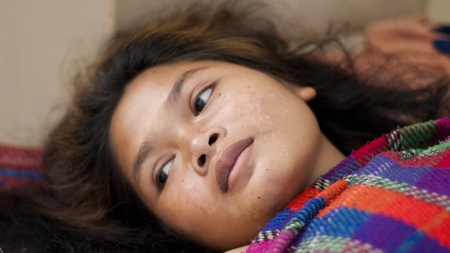 Members of the North-east public are invited to join experts in international development, politicians and leading campaigners this Friday, March 1, to discuss urgent issues in global healthcare for women in childbirth.

The event at 5.30pm in the Macrobert Building on the University of Aberdeen’s King’s College campus will feature the screening of the acclaimed new film Sister, as part of  Scotland’s ‘Take One Action Film Festival’.

The Aberdeen event is being organised by Immpact, the University of Aberdeen’s research programme focusing on safe motherhood across the world, and the University’s Centre for Sustainable International Development.

Lack of transport, communication, education and investment in healthcare mean that in Ethiopia, Cambodia and Haiti, for example, one in forty women will die when having a child.

With tenderness, incredible access and a real-life cast of heroes Sister follows three health workers in these three countries, exploring how they find hope and meaning against all the odds as the film follows them through home visits, deliveries and moments of quiet reflection.

Professor Wendy Graham, Lead Scientist with Immpact and the new Soapbox Collaborative, said “Raising public awareness of the poor state of health among mothers and babies in low -income countries is one of our responsibilities. This film shows clearly the harsh realities in these places, including Ethiopia where Immpact is working with the Government and the World Health Organisation to show how lives can be saved."

The film will be preceded by audience discussion about where ordinary people in Scotland come into the story, with speakers including Humza Yousaf, Scotland’s Minister for External Affairs and International Development, Anne Begg MP, and campaigner Ann Gloag OBE.

Mr Yousaf said: “Every day, 800 women die from pregnancy and childbirth-related complications. Many of the countries with the highest maternal death rates are in sub-Saharan Africa – including Malawi, Scotland’s historic ‘sister-nation’. This horrific and preventable daily loss of life is unacceptable.  Scotland is already playing a part in trying to change this: the Scottish Government is protecting international development spending and supporting projects which make a real difference to the lives of the world’s most vulnerable people. For example, the Scotland Malawi Anaesthesia Project - supported by the University of Dundee - provides training for healthcare workers to reduce the number of women dying in childbirth. However, we can and must do more – including setting a good example for others to follow.”

Take One Action director Simon Bateson said: “Sister foregrounds issues which people in Aberdeen – by calling for more action – can actually influence, to stop millions of women and children dying unnecessarily. We’re thrilled to be back in the city championing films that may not have The Hobbit’s budget, but which deserve much larger audiences.”

Sister is showing as part of Take One Action’s annual tour of Scotland, taking in communities from Shetland to Edinburgh, and topics including Israel-Palestine, the wind farm debate, and global hunger.