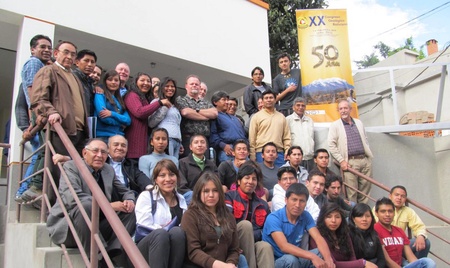 North-east Scotland’s historical links with mining in Bolivia have been reaffirmed with the University of Aberdeen’s backing for the new headquarters for the Bolivian Geological Society.

One of the founding members of the society, Charles ‘Scottie’ Bruce, hailed originally from Fetterangus, and after moving to Bolivia in 1960 to work as a miner went on to establish a scholarship scheme with the University.

One of the geologists who took part in the scholarship scheme, Stewart Redwood, moved out to Bolivia to work with Scottie Bruce and continues to work throughout the Latin American mining industry today and was present for the official opening of the centre.

Dr Clive Rice of the University of Aberdeen said: “Scottie Bruce has provided generous support to many of our PhD students over the years. This centre will be responsible for co-ordinating and supporting national and international academic and commercial projects and to that end we in Aberdeen look forward to continuing the strong relationship that we have developed.”

The new centre in La Paz is the first official home the Society has had in its 50 year history and boasts a lecture auditorium, a library and a mineralogical museum.

Latin America is becoming an increasingly important area of development for the University of Aberdeen, and our strength in teaching and researching geosciences is being recognised across the world. We are delighted to support this new facility for the Bolivian Geological Society as part of our commitment to our ongoing association.”

Despite being seemingly worlds apart both geographically and culturally, several generations of men from Aberdeenshire have been involved with mining in the South American state since the mid-19th Century.

The connection is all the more unusual as the north-east of Scotland has no mining heritage and there are no similar links between Bolivia and the UK’s traditional mining towns.

Andrew Penny, known as the Silver King, left his home near Aboyne in 1852 to work on a sailing ship from which he made his way to Bolivia where he found work in the Corocoro copper mines. By 1885 he had become sole owner of the San José mine at Oruro – one of the great silver mines of Bolivia.

Several of Penny’s relatives followed him to Bolivia and today the family name lives on in Oruro through a girls’ orphanage – the Centro Amor de Dios Penny (Penny Centre of the Love of God), built in 1897 and still operates as an orphanage today. In addition there is a Penny hospice in the atrium of the San Miguel Church donated in 1891.

Penny was followed to Bolivia by James Duncan born at New Leeds, Aberdeenshire, who travelled to South America with Andrew Penny’s nephew in 1882. Duncan made his money by discovering vast reserves of tin in the San Antonio mine in Huanuni in 1896-97.

The official opening of the headquarters took place in a ceremony on October 1, 2012, when a plaque bearing the names of the benefactors was unveiled.