Nooreen to display research at Houses of Parliament
20 February 2013 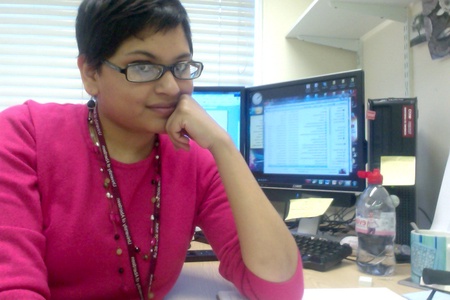 A University of Aberdeen PhD student has reached the final stages of a national competition to showcase groundbreaking research to Members of Parliament.

Nooreen Akhtar will display her work at the Houses of Parliament next month as part of the Set for Britain 2013 competition – and could win a top prize of £3,000.

Nooreen’s studies focus on the portrayal of anti-depressants by the print media in the UK and the effect that has on public perception of the drugs.

Nooreen explained: “The study began as a two year M Phil project examining the portrayal of anti-depressants in UK newspapers which concluded that the media presented a very negative and sometimes misleading picture of anti-depressants between 2007 and 2010.

“This negative nature of reporting may contribute to the reader’s perception of anti-depressants and influence their decisions regarding this and other kinds of medication.

“The project is now being built upon as part of my CSO Doctoral Fellowship, which will involve the use of computational linguistics to examine how journalists write about issues related to this controversial class of medication.

“I will then conduct focus groups to explore how these news articles and the writing styles employed by journalists are interpreted by patient and public groups.”

Nooreen, who is part of the Psychiatry Research Group, will display her work on a large poster along with other successful nominees in the House of Commons Terrace Marquee on Monday March 18.

Dr Rhiannon Thompson of the University’s Public Engagement with Research Unit said “We’re delighted that Nooreen has been selected for this year’s prestigious Set for Britain competition. We’re looking forward to working with her further as she prepares for the event and follow-up engagement opportunities.

The Set for Britain competition was set up to encourage dialogue and engagement between early-stage researchers and Members of both Houses of Parliament.