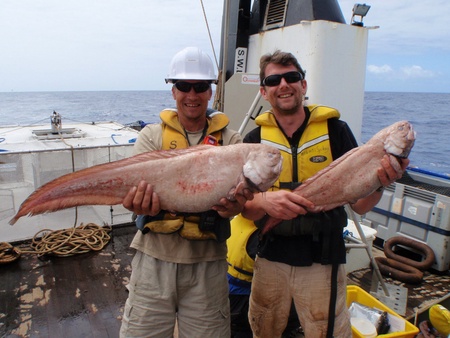 University of Aberdeen scientists have returned from a voyage to one of the deepest points on the planet where they discovered a new species of fish and gained new knowledge of life at previously unexplored depths.

The research expedition - involving scientists from the University of Aberdeen’s Oceanlab, NIWA and Museum of New Zealand Te Papa Tongarewa - explored waters well below the depth that light penetrates, on the edge of the Kermadec Trench. It is one of the deepest places on Earth with depths exceeding 10km.

The scientists onboard the research vessel RV Kaharoa used landers with cameras attached that free-fall to the seafloor, as well as baited fish traps to attract the animals. The equipment was designed and built at Oceanlab.

Voyage Leader Dr Alan Jamieson, from Oceanlab, said, "We are never quite sure what we will find on these expeditions to unchartered territories. We had set out to find out more about the deep sea fish communities and we were delighted to find both new species and new depth records for fish.”

The amount of data recovered during this latest expedition is substantial and adds to the information collected on three previous voyages to the Kermadec Trench by the Aberdeen-NIWA collaboration aboard the RV Kahora.

Dr Jamieson added: “Between this and the previous expeditions we have now sampled from a depth range greater than Mount Everest is high.  What makes the whole experience even more personally satisfying is that all the equipment used in these research cruises was designed and constructed at Oceanlab."

NIWA Principal Scientist Dr Malcolm Clark said: "The international collaboration enables New Zealand researchers to use scientific equipment we don't have, and to sample places that would otherwise be inaccessible, and hence unknown.

"The results from this deep exploration are giving us a much better understanding of biodiversity in the deep sea around New Zealand, and enable us to better assess potential risks to the ecosystem from future climate change and even human activities which may include seabed mining."

Dr Jamieson added: "A voyage such as this is testament to how feasible scientific research in the deep sea has become. It is no longer the inaccessible, out of reach, part of the world it once was. The technological challenges of the past are being overcome, and shouldn't limit our responsibility to learn about and understand the deep sea to help ensure the long term health of the deep oceans - one of the largest environments on Earth."

The new specimens will be held at the National Fish Collection at the Museum of New Zealand/Te Papa Tongarewa.

Funding for this voyage was primarily from the Marine Alliance for Science & Technology for Scotland (MASTS), and is supported by NIWA's Deep-sea Communities project funded by the Ministry of Business, Innovation and Employment (MBIE).