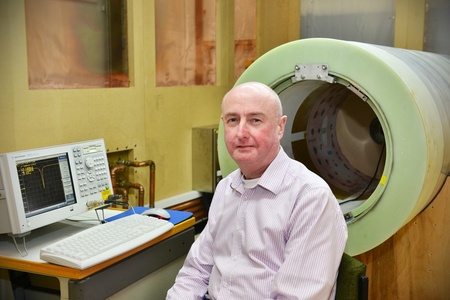 Aberdeen scientists are developing what is thought to be the first scanning method of its type in the world which may allow key diseases to be detected much earlier and in more detail.

The University of Aberdeen team has been awarded £979,000 from the Engineering and Physical Sciences Research Council (EPSRC) to develop a radically new type of MRI - Magnetic Resonance Imaging - scanning technique which may ‘see’ disease at an earlier stage than standard MRI.

It is hoped the method - known as Zero-Field MRI (ZF-MRI) - may also reveal ‘biomarkers’ -detectable indicators of disease state or progression -  which might eventually help pharmaceutical companies to develop new drugs for neurodegenerative diseases such as Parkinson’s and Alzheimer’s, as well as other diseases like cancer and osteoarthritis.

The research project is a collaboration of University of Aberdeen researchers in medical physics, radiology, neuroscience and neurology who are currently creating the new piece of technology at the University’s biomedical physics building. Aberdeen has long led the way with scanner technology. Aberdeen scientists and clinicians were the first in the world to scan the body of a patient using MRI in 1980.

Professor David Lurie, a medical physicist, who is leading the project, said: “Neurodegenerative diseases are a serious concern with more than 850,000 cases in the UK, and numbers are expected to double in the next 40 years because of our ageing population.

“There is an urgent need for new drugs that could be used earlier to slow disease progression but none currently exist and one of the major barriers to that is the difficulty of early diagnosis of disease.

“In the case of Parkinson’s, for example, the disease is diagnosed purely from clinical symptoms because imaging methods are not currently available to detect early changes in the brain before the symptoms actually develop.

“New technology like Zero-Field MRI could hopefully allow us to see diseases at an earlier stage. This would also be of great help to drug companies who use what are called biomarkers in the body to measure how a disease is progressing and to monitor if a drug treatment is actually working.”

ZF-MRI will be a radical departure from standard MRI which takes pictures of the body using a constant and very powerful magnetic field.

ZF-MRI will take the magnetic field within the scanner – including the Earth’s own magnetic field – very close to zero, in order to see disease-related changes in tissue that cannot be seen by conventional MRI.

Dr Lionel Broche, Research Fellow at the University, said: “Right from the early days of MRI it has been known that the contrast that can be seen between normal and diseased tissue is greater at lower magnetic fields. This is because of the way in which molecules move around in tissues, altering the signals that are detected and used to form the detailed MRI pictures.

“At low magnetic fields the speed of the molecular motion is more closely matched to the frequency of the MRI signals, making the technique more sensitive to changes. ZF-MRI should provide us with exquisite sensitivity to subtle changes in brain tissue, bringing the possibility of early diagnosis.”

ZF-MRI will be used together with another MRI technique, pioneered by Professor Lurie’s team, called Fast Field-Cycling MRI (FFC-MRI) which can also ‘see’ extra information, compared to normal MRI.

Unlike conventional MRI, FFC-MRI switches rapidly between different magnetic fields – an effect rather like having 100 or more scanners with differing scanning capabilities within the one scanning machine. ZF-MRI will add measurements made at zero magnetic field to the range covered by the scanner.

The ZF-MRI technology will be incorporated into an FFC-MRI scanner already developed by Professor Lurie’s team.

Professor Lurie said: “At the moment our focus is on neurodegenerative diseases, but ZF-MRI has the potential to be used in a range of other diseases such as cancer, osteoarthritis, fibrosis and thrombosis. We have already made a start on studying those conditions using our existing FFC-MRI scanners.

The work will span three years and will initially involve researchers modifying the FFC-MRI scanner to allow zero-field measurements to be carried out.

They then plan to use ZF-MRI to scan small objects such as bottles containing protein gels to mimic normal and diseased tissues.

Towards the end of the study the team hope to be able to image some patients with neurodegenerative diseases, in particular Parkinson’s and Alzheimer’s.

Professor Lurie’s team is one of just three research teams in the world – the only team in Europe – to be working on FFC-MRI.

“We believe we are the first in the world to be working in this way on ZF-MRI and we are delighted to be continuing to build on the University of Aberdeen’s imaging legacy, said  Professor Lurie.

“It is especially gratifying to have won this funding from EPSRC, because we did so in direct competition with bids for healthcare engineering projects from many of the top research-led universities in the UK.  The funds will enable us to build on our recent work on novel MRI technology, which has been funded by EPSRC awards of £2.4M in 2007 and £200k in 2011.”