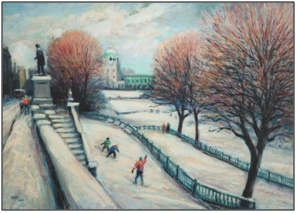 A new exhibition of work by Aberdonian artist Eric Auld, which includes work spanning more than 60 years, is now on display at the University of Aberdeen.

The city, shire and surrounding area have provided the inspiration for Auld’s paintings and drawings over the decades and the exhibition features many local landmarks and atmospheric representations of north-east landscapes.

It is the first time Auld’s work has been displayed at the University and the exhibition, in the Old Townhouse, High Street, will run until April 30.

Shona Elliot, Curator of Documentation and Fine Art, at the University of Aberdeen said: “We're very pleased to be showing Eric's work for the very first time.

“It has a strong local resonance with pictures from around the University, Aberdeen City and Shire.

“Many of these are from an unusual perspectives and I’m sure visitors will enjoy seeing familiar landmarks presented in a way they may not have seen before.”

Auld has strong connections to Aberdeen and is a graduate of Gray’s School of Art, a Burgess of the Guild of the City of Aberdeen plus a Fellow of the Royal Society of Arts.

He has created a wide range of scenes and portraits over the years, including continental work courtesy of a Robert Brough Travelling Scholarship, images painted during his National Service years and artworks produced while he was a member of the Aberdeen ABBO Group (Eric Auld, Bill Baxter, Donny Buyers and Bill Ord), 1957 to 1967.

Many of his images have been commissioned for businesses and his paintings can be found in public and private collections throughout the world and in galleries selling art. Artworks on show in The Old Town will be available for purchase.

The Old Townhouse is open Monday-Friday from 9am-5pm all year.  The building is also open on Saturdays from 10am- 4pm during winter and from 9am-5pm from April.

A second new exhibition has also opened at the University featuring photographs showing the traditional life of indigenous peoples across the Russian Arctic, by Brian and Cherry Alexander.

The exhibition on the ground floor of the MacRobert Building will run until the first week of April.