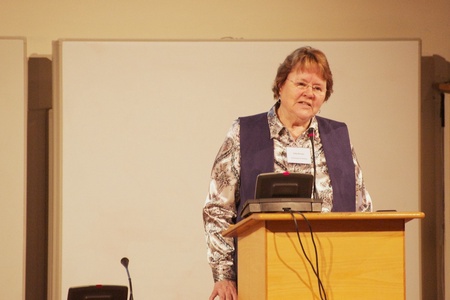 The Symposium updated staff on current discussions around 'Curriculum for Excellence' (CfE), which represents a radical change in the way education for 3-18 year olds is being organised and delivered throughout Scotland.  The Symposium then looked at the implications of CfE for recruitment, teaching and assessment of students across the higher education sector. This topic complements the current QAA (Scotland) Enhancement Theme, ‘Developing and Supporting the Curriculum’.

The keynote speaker this year was Professor Sally Brown OBE, Professor Emeritus in the School of Education at the University of Stirling and Convener of the Royal Society of Edinburgh’s Education Committee.

Professor Brown reiterated the principles and aims underpinning Curriculum for Excellence, before describing the new qualifications that Scottish schools are introducing currently.  She went on to discuss some of the challenges facing universities in advance of the first applications from school pupils to university in 2015.

Other invited speakers provided alternative perspectives on the introduction of CfE.

Kenny McIntosh from the University of Aberdeen’s School of Education used his own ‘Learning from Work’ level 1 course to highlight the continuum of learning that might be achieved between school and university.

Andrew Griffiths, Head of Education at Aberdeenshire Council, provided a schools’ perspective on CfE, highlighting along the way similarities between the CfE ‘four capacities’ and the University’s Graduate Attributes.

Professor Peter McGeorge, Vice-Principal for Learning and Teaching said, “Spending time hearing different perspectives on Curriculum for Excellence by colleagues from both the H.E. and Schools sectors is valuable. Hearing about the similarities between the four capacities and our own Graduate Attributes highlights the learner-centred approach that both sectors are now taking.”