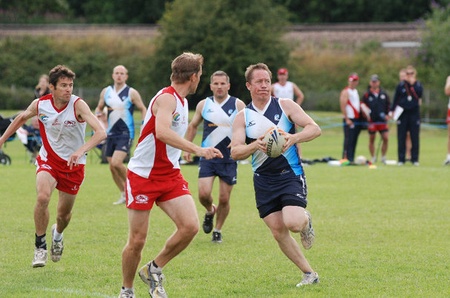 A University of Aberdeen sports coach is heading down under to represent Scotland at one of the world’s biggest touch football events.

Campbell said: “The competition is a regional event for the best Australian club teams but they invite some of the standout international teams along as well to take part. So Hong Kong and Papa New Guinea are taking part alongside us this time following our European title win last September.

“Australian Rugby League players take part in the Touch leagues in the off season. I once found myself playing against current New Zealand Rugby League captain Benji Marshall, which was amazing! It just shows you how high the standard is.”

Touch football is based on rugby league and rugby union and started life as a non-contact training method for these sports, allowing teams to practice without fear of tackle-related injury. It was established as a sport in its own right in the 1960s but league matches didn’t begin in Scotland until 30 years later. The Scottish Touch Association (STA) was set up in 2005 and Edinburgh hosted the sport’s World Cup in 2011. Today the sport boasts federations in Europe, the USA and New Zealand and Australia – where it is most prolific.

The game is played in a similar style to rugby league but instead of tackling the team in possession are allowed to be ‘touched’ six times before having to turn possession over to the opponents. The object is to get the ball over the opponent’s touchdown line before they are touched six times.

Campbell added: “I’ve been involved in Rugby Union and League all my life but Touch Rugby is by far the fastest game I’ve ever played. There are 14 in the team but only six on the field at one time and you’re basically sprinting for 90 seconds and then being subbed off and then before you know it you’re back on to sprint for 90 seconds again!”

The competition will be an emotional event for Campbell after his mother passed away during Scotland’s European triumph last year.

“We were in Italy for the competition and my mother took ill during the event. I flew back to be with her and sadly she passed away. Something in me knew I had to go back out and finish the tournament – which I did and we ended up winning the final against England. After the game all the players on both teams knew what I’d been through and they all dropped to one knee and observed a minute’s silence for my loss. It was incredibly emotional.”

Scotland have previously taken part in the Men’s section of the NTL competition but this time are fielding a team in the Mixed competition which comprises of men and women.

Campbell said: “We’re all really looking forward to the event. Touch is unique from the other rugby games in that you can field mixed teams. I think this makes it more accessible and also attracts younger people to rugby as a whole so it’s great news that its popularity is on the rise.”

The competition gets under way in Coffs Harbour, just south of Brisbane on March 13.