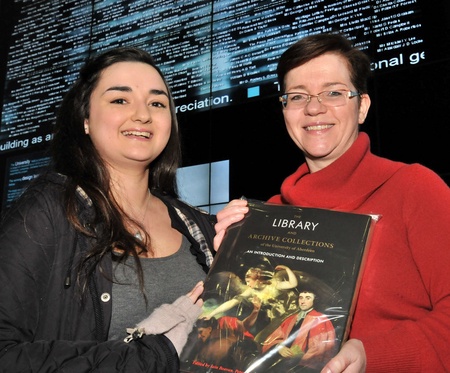 The University of Aberdeen’s Sir Duncan Rice Library reached an important milestone on Wednesday (January 16) as it welcomed its millionth visitor through the doors.

Fourth year psychology student Natasha Sangha (21) was heading to the library to do some last minute revision when she took her place in the library’s history.

Running 20 minutes behind schedule proved lucky for Natasha who was notified of the significant news after swiping into the library at 9.20am.

Natasha, who is studying for a BSc in Psychology, was gearing up for a Human Factors exam when Chris Banks, University Librarian and Director of Library Special Collections and Museums, told her the news and presented her with a copy of The Library and Archive Collections of the University of Aberdeen, a sumptuous book about some of the University’s greatest treasures.

Natasha, originally of Dunoon, said, “I am so excited that I was the millionth visitor to the library, I couldn’t believe it when I was told. I thought when I arrived at the library that a few of the staff were watching me and then my ID card wouldn’t scan, so when I eventually got in and was taken aside I wondered what was going on! It was brilliant news to receive.

“We have lots of lovely buildings on campus, but the library is definitely my favourite. It’s a fantastic place to study and when it comes to exam time, I feel like I practically live in it.

“When the library first opened, I couldn’t wait to get back to University so I could see it and it really is stunning, so to now be part of its history is a fantastic honour. It certainly livened up my morning revision plan!”

Chris Banks added, “I am delighted that the library has now welcomed it millionth visitor through its doors and Natasha will now be part of the library’s history.

“Since we began using the new building in September 2011, we have seen a 52% rise in the number of people using the library and a huge 202% increase in non members visiting the building.

“The number of students using the library is also much higher than previously, which is fantastic as the university is extremely proud of the building and it is great that others are enjoying it too.”

For more details on the book Natasha received, The Library and Archive Collections of the University of Aberdeen, please visit:  http://www.abdn.ac.uk/library/news-events/news/newsletters/headlines/issue-8/#treasures