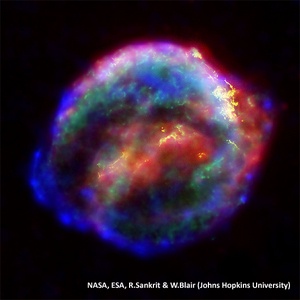 We've heard of the Higgs boson, or 'God particle' but now a University of Aberdeen astrophysicist's hunt for what could be the Universe's last undiscovered particle has been put to the test.

The radical theory, proposed by Dr Charles Wang, could help to explain why stars explode and has just been the subject of an experiment at CERN - one of the world’s biggest research centres.

Exploding stars – or supernovae - are among the most powerful events in the Universe and are vital to allow planets like Earth to form and support life by generating heavy elements through fusion.

They occur when a star collapses under its own gravity after it has used up all its lighter nuclear fuel. The resulting implosion compresses the star’s iron core into neutrons.

Scientists have never been able to explain why supernovae are so explosive and it remains one of the greatest outstanding mysteries of the Universe, unsolved by any known methods of using the current laws of physics.

Dr Wang’s theory suggests when massive stars collapse the extreme gravity energises the fabric of space and generates a new subatomic particle which is the cause of the explosions.

If proven Dr Wang says the significance of the discovery cannot be underestimated.

He said: “This particle might be the last to be found – the Holy Grail of theoretical physics. It could solve the 50-year-old question of why supernovae explode.”

After announcing plans of the experiment at the British Science Festival in September Dr Wang says he’s been amazed at the amount of interest in the project.

He commented: “I’ve been pleased but surprised by the level of public curiosity in this experiment. Recently, I was sitting next to a man on a plane – who wasn’t a physicist – and he recognised me. He was really excited about the experiment and was asking questions and wishing me well with it all.”

Dr Wang’s experiment attempts to mimic the nuclear reaction that happens at the centre of a collapsing supernova in a bid to determine the nuclear process at the point of explosion.

Dr Wang participated in the experiment which was carried out earlier this month by an international team of experimental physicists led by the University of Edinburgh using CERN’s ISOLDE facility.

He added: “I’m even more optimistic about the experiment after meeting with the team and overseeing its beginnings at CERN.

“As a theoretical physicist, I have the great privilege of working with experimental physicists – I find it very stimulating. It seemed like my presence there boosted the morale of the whole team.”

Whilst many more experiments would be required to prove the existence of the ‘Wang’ particle, the experiment at CERN could be the first step.