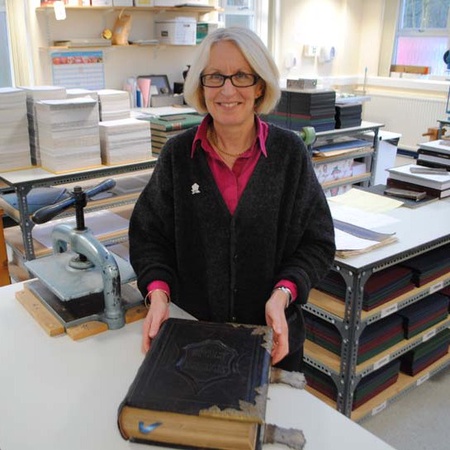 A University of Aberdeen employee is hoping her book is judged by its cover as part of a prestigious European bookbinding competition.

Bookbinder Trish Burge is one of only 30 from across the continent whose leather bound tome will be examined as part of the Elizabeth Soutar Competition which recognises excellence in the craft of bookbinding.

Recent winners of the competition have hailed from as far afield as Germany, Italy and Japan.

Trish said: “I spent around six months on and off creating my book. I designed it all – I hand dyed the leather and spent hours carefully binding it.

“It is something of a dying art – with the increase of computerised publishing and e-books but it’s not just a job for me, it’s a real passion.  I saw a demonstration of bookbinding whilst on holiday in Edinburgh and I was instantly intrigued. From there I enrolled in an evening class and eventually I was lucky enough to be taken on as an apprentice at the University.”

Trish took an unusual route into the bookbinding world – trading high-tech for low-tech after beginning her career working in IT. She’s never looked back though and has now been with the University for almost seven years.

She said: “It was quite a change of direction – there are some similarities though. I’m a bit of a perfectionist and like to pay attention to detail.”

That attention to detail will hopefully serve her well as judges scrutinise her submission on the quality of her technical work and finishing as well as her use of complex and unusual bindings to score points for flare.

Since St Andrew’s University closed its book binding department a few years ago Aberdeen’s is the only facility north of the Central Belt. As a result they receive orders from all over the world and have handled many rare and valuable items – dating as far back as the 17th Century.

The competition will be judged at the National Library of Scotland on Friday December 14. The four top books will be kept in the Library’s permanent collection and the winning entrant will receive the main prize of £1,200.

Trish has applied twice before so she’s hoping it will be a case of third time lucky.