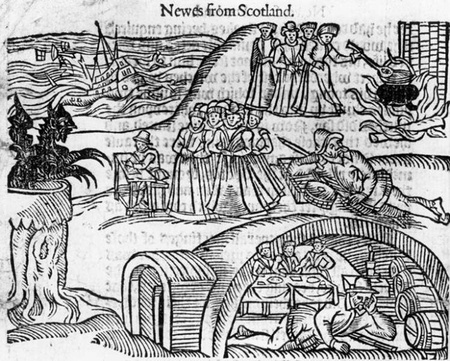 The largely forgotten gruesome story of how 24 people were executed in an Aberdeenshire witch hunt in the 16th Century is being brought to light by a University of Aberdeen professor.

Across Scotland around 400 people were put on trial and a suspected 200 were killed over six months but the panic began just outside Aberdeen in Dyce in January 1597.

From there the investigation moved to Dunnoter, into Aberdeen city and then onto Lumphanan before coming to an end in Banff in June the same year.

Professor Bill Naphy said the deaths, carried out in the city’s Gallowgate, were “spectacular events”.

He said: “The usual form of execution for a witch was to be tied to a stake, strangled and set on fire.

“The first six months of the panic is entirely focused in Aberdeen and Aberdeenshire. They arrested a family in Aberdeen and the son confessed that at Halloween, he met with a group of witches at the Fish Cross which is in front of the present Tollbooth. That scared the daylights out of the city and they started to think they had a serious problem on their hands.

“Nearly a dozen from the village of Lumphanan were killed - which at the time would’ve been a considerable proportion of the female population.

“Most historians know about the 1597 outbreak but it’s completely eclipsed by the Great Scottish Witch Hunt of 1590-1591 in Edinburgh and Lothian because that one involved the King. However the 1597 outbreak was much more widespread nationally.”

Hardly any records of the events survive – which makes the history of witchcraft in Scotland difficult to document.

Professor Naphy added: “We have small pieces of information – we have bits of the trials of individuals which is why we have a few names. We also know there were a couple of people executed we don’t even have names for. Collectively we have a pretty good idea what happened.

“It appears to be down to relations – someone who was accused in one village, had a family relation in another village and so the investigation followed accordingly.”

Village ’wise men or women’ were common in pre-modern society and although they were feared, they were usually tolerated and respected because of their perceived power.

“A witch is a dubious person in society because they can both bless and curse – they can make your child or your cow healthy or they can make them ill. So the witch is perceived to be have ‘access’ to power.

“If the witch’s behaviour started to scare the villagers though, that’s when they’d call in the state. The state isn’t concerned about the love potions, sick cows or the sick babies – it’s interested in where the witch is getting her power – Satan or God. They assume a witch has made a contract with Satan.

“It seems it was the state that applied the notion of witchcraft and devil worshipping – the villagers never mentioned anything of the sort.”

By the mid-17th Century most places in Europe stopped prosecuting witches. The last successful prosecution under the 16th Century Witchcraft Act in Britain was in the 1940s. After that, all the Witchcraft Acts were repealed so it was no longer a crime.

Professor Naphy will discuss the Aberdeenshire witch hunt during a series of talks at Ellon Academy on Thursday 13 December.

Professor Naphy commented: “Most schools focus on history that comes with moving images – such as the Second World War – so to get them to engage with pre-modern, pre-visual history is different so it has to be topics that can grab their attention, which is why I think I’ve been asked to give this talk.”