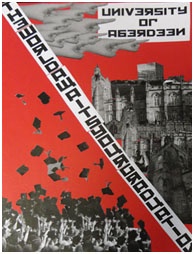 An exhibition by a selection of third year Honours History of Art students, from the University of Aberdeen, will open at the James Mackay Hall, King’s College, today (December 12). On show will be some of the students’ own Soviet-style posters.

Art history lecturer Dr. Amy Bryzgel said, “It is interesting to see the student perspective reflected in their posters. The students have created some very compelling images, which showcase what is important to them, based on their own particular interests and experiences here.”

Key Soviet artists such as Gustav Klucis, El Lissitzky and Alexander Rodchenko, all of whom worked to further the message of socialism, influenced the creation of the students’ works. Roxanne Mackie, of the group’s management team, said that “Our intention is to show what life is like as a student at the University of Aberdeen – what it is like to live and to study here, depicting a more light-hearted side of the experience.”

The exhibition is free and will open to the public on Wednesday, 12th December in the James Mackay Hall, King's College. The posters will remain on display until the 1st of March 2013.