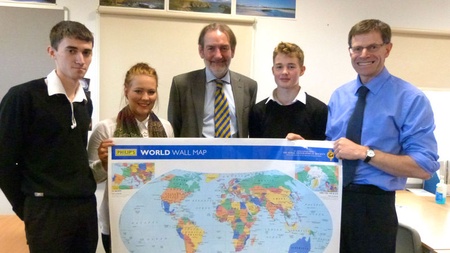 Pupils at Portlethen Academy had the opportunity last week to quiz University Principal Professor Ian Diamond on an issue of huge global importance, as part of the national Speakers for Schools week in Scotland.

Professor Diamond, an eminent statistician, discussed with S5 and S6 Geography pupils the challenges posed by our booming world population, the consequences of differences in population structure, and the implications for the UK including possible government responses.

Speakers for Schools is the brainchild of BBC Business Editor, Robert Peston, who wants young people in state schools and colleges across the UK to have the same opportunities to hear from inspirational speakers as those who attend top independent schools. The initiative is administered by the charity the Education and Employers Taskforce.

The Scottish Speakers for Schools week was launched on Friday 9 November with talks in schools by First Minister Alex Salmond, and Michael Moore, Secretary of State for Scotland.

Across the country leaders in Scottish business, media culture, academia and politics pledged to give a talk to students in a state secondary school once a year to raise aspirations and broaden horizons. The week was chosen to coincide with the annual Scottish Leaders Conference on November 16 in St Andrews.

Across England and Scotland over 800 speakers have so far agreed to participate in Speakers for Schools, including many leading CEOs, politicians, media and arts people, scientists, entrepreneurs and academics. Speakers will address the big topical issues: technological, scientific, political, economic, historical, cultural, artistic, ecological and ethical.

Neil Morrison, Head Teacher at Portlethen Academy said: “We are delighted to participate in the Speakers for Schools scheme as it links the school with people, places and topics that inspire young people. It reinforces the message that schools and their partners are working together on common issues and develops common understanding for young people and the speakers by bringing them together."

Professor Ian Diamond said: “I think this is a brilliant initiative, and I’m delighted to have the opportunity to discuss with the young people at Portlethen a topic of huge global importance which will continue to pose major challenges to their generation. It’s vital that we do everything we can to inspire and engage all young people on the big issues confronting our global society today, and I’m delighted to lend my support to such a great project.”

Robert Peston, BBC Business Editor and founder of Speakers for Schools said: “Our future prosperity depends in part on raising aspirations for young people, which can be helped by securing access for them to brilliant and inspirational minds. I am thrilled that so many great speakers are participating in Speakers for Schools in Scotland.”