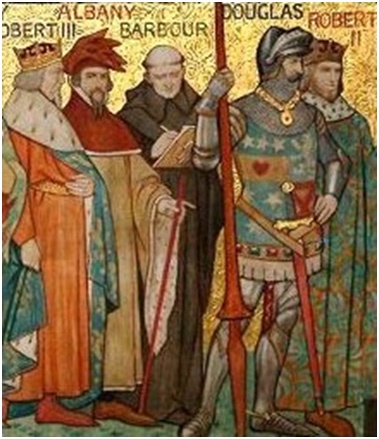 A lecture series celebrating the lives of Granite City greats is returning for a second series after proving a hit with the public.

Organised by the University of Aberdeen’s Research Institute of Irish and Scottish Studies, in collaboration with Aberdeen City Council, Great Aberdonians celebrates some of the city's well travelled sons who made their mark on society.

The inaugural series ran between November 2011 and May 2012 in the Town and County Hall of the Town House on Union Street and attracted audiences keen to hear of the historic achievement of citizens of the city.

Series two will get underway on Wednesday (November 14) when Dr Jackson Armstrong of the University of Aberdeen will discuss the life of John Barbour, who lived from 1330 to 1395.

Dr Armstrong said: “Barbour is celebrated as the ‘father of Scots poetry’ and wrote The Brus, an epic poem which immortalised Robert I as the quintessential Scottish monarch, and which famously rejoiced in the troublesome idea of freedom.

“Barbour was also archdeacon of the diocese of Aberdeen and his career reveals much about political life in the age of the early Stewart kings, Robert II and Robert III. It also speaks to Aberdeen’s legacy as a seat of scholarship and cultural energy long before the foundation of its first university.”

Great Aberdonians will continue in the New year with Professor Jane Geddes from the University of Aberdeen exploring the life of the institution’s founder Bishop William Elphinstone on January 9, and with Dr Andrew Mackillop following on February 13 with a look at the adventures of John Forbes of Newe, a merchant of the early British Empire who earned the nickname ‘Bombay Jack’.

March sees the turn of Professor Andrew Blaikie discussing William Alexander (1826-1894), a journalist and radical Liberal and the series will conclude in April with Dr Tim Baker delving into the life and work of Ian Macpherson (1905-1944).

Dr Michael Brown, a lecturer in history at the University and organiser of the Great Aberdonians series, said: “Great Aberdonians not only offers an opportunity for members of the public to learn more about the fascinating lives of individuals who come from the city, it also sheds light on the creative culture of Aberdeen and its part in the development of modern science, art, philosophy and politics.

“The first series proved very popular and we’re delighted to bring back the lecture series.

“I think the programme will offer something to suit all interests with the opportunity to learn more about a wide selection of Great Aberdonians.”

Great Aberdonians is free of charge and booking is not required. Lectures get underway at 7.30pm in the Town and County Hall, Town House, Union Street, Aberdeen.