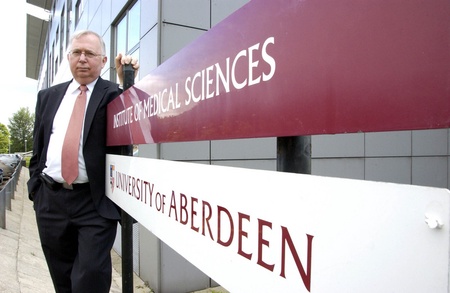 TauRx Therapeutics Ltd announced today the initiation of two global Phase 3 clinical trials in mild to moderate Alzheimer’s disease. These landmark studies could provide the first definitive data on a Tau‐based approach to disease‐modifying and preventative treatment of Alzheimer’s for at least the next 5–7 years, said Professor Claude Wischik, Chairman of TauRx and Professor of Old Age Psychiatry at the University of Aberdeen, in a press conference at the 5th Clinical Trials Conference on Alzheimer’s Disease (CTAD) in Monte Carlo, Monaco today.

The studies culminate three decades of research by Professor Wischik and colleagues, including the original discovery of the Tau protein as the main constituent of the Tangle pathology of Alzheimer’s disease [‘Tau tangles’], the development of the first Tau Aggregation Inhibitor (TAI), and results from an earlier Phase 2 clinical trial involving more than 300 patients that showed a 90% reduction in the rate of disease progression over two years.1

“These Phase 3 studies are bringing us closer to finding an effective treatment that can actually arrest the progression of the disease,” said Professor Wischik. “We are building on over thirty years of research, and the encouraging results from our previous Phase 2 clinical trial in Alzheimer’s disease support an approach which targets the abnormal Tau aggregates in the brain.”

The studies, which have already starting enrolling in the U.S., aim to confirm the disease‐modifying effects seen in the Phase 2 studies in mild to moderate patients over an 18‐month timeframe.

The first study will involve 833 people with mild to moderate Alzheimer’s disease over 12 months.2

The second study will include 500 people with mild Alzheimer’s disease over 18 months.3

The study drug, LMTX™, is a second‐generation TAI that targets the Tau tangles and their precursors, dissolving them in order to halt their harmful effects on memory.4‐6 LMTX™ also works on the early stage Tau aggregates (called ‘oligomers’) which are precursors to fully‐formed tangles and are thought to be particularly toxic.7

“Clinicians devoted to Alzheimer’s disease have been waiting for a promising agent with disease modifying properties,” said Professor Serge Gauthier of the McGill Centre for Studies in Aging, Quebec, Canada. “

The basic science data for this agent, particularly in the tauopathies, looks sound and the interest among investigators and among families is high.” Professor Gauthier is a clinical investigator and scientific advisor for TauRx.

The tangles in the brain were first reported by Dr. Alois Alzheimer in 1907,8 starting the century‐long journey to understand the pathology leading to their formation, their role in dementia, and, ultimately, how to stop their spread through the brain.

Professor Lon Schneider, MD, of the Keck School of Medicine at the University of Southern California, a scientific advisor for TauRx, said: “Successfully targeting Tau may be an important approach towards slowing and ideally halting the neuro‐degeneration that is characteristic of Alzheimer’s disease or frontotemporal dementia. Clinicians need these Phase 3 studies to produce clear evidence that such an approach could lead to improved patient outcomes.”

Professor Stephen Logan, Senior-Vice Principal at the University of Aberdeen, added: "We are delighted that the pioneering chemistry and neuroscience which led to this exciting development has come from the University of Aberdeen and its spin out company TauRx. The University is strongly committed to identifying and nurturing innovative thinking in health research, and to encouraging its translation into therapies that can revolutionise treatment, diagnosis, and ultimately prevention or mitigation of the health conditions which will increasingly challenge families, health services and  economies in our ageing global population."

Patients and caregivers are invited to sign up for study updates at www.AlzheimersStudies.com

as the clinical trials are initiated in the countries selected.

About Alzheimer’s Disease and Tau Tangles:

Alzheimer’s disease is one of the most important health challenges worldwide, and the most‐common type of dementia. According to the Geneva‐based World Health Organization, global dementia cases are expected to double within 20 years to an estimated 65.7 million people [more than the entire population of France currently at 63 million people].9 In very early, asymptomatic Alzheimer’s, pretangle Tau aggregates (oligomers) and Tau protein tangles are already present in the same regions of the brain where neuronal degeneration and loss of neuronal cells eventually occur.10,11

These changes first appear 20 – 30 years before the disease becomes clinically evident. With time, Tau tangles spread from the entorhinal cortex (responsible for learning, memory, thinking and planning) through the hippocampus to the neocortex (affecting the ability to communicate, recognize family and loved ones and to care for oneself), resulting in neuronal dysfunction and worsening of clinical symptoms.11

The spread is now thought to be due to a prion‐like process whereby the oligomers act as ‘infectious particles’ which are able to propagate the abnormal aggregation of Tau protein from one neurone to the next.12

These oligomers recruit normal Tau to produce yet more infectious oligomers which spread neuronal destruction throughout the brain.

TauRx Therapeutics Ltd was established in Singapore in 2002 with the aim of developing new treatments and diagnostics for a range of neurodegenerative diseases based on an entirely new approach which targets aggregates of abnormal fibres of Tau protein that form inside nerve cells in the brain, giving rise to Tangles.

The TauRx team have since discovered that LMTX™ could also have beneficial effects in several other neurodegenerative diseases associated with Tau pathology, as well as other protein aggregation disorders including Parkinson’s, Huntington’s, Frontotemporal Dementia [FTD‐Pick’s Disease], Progressive Supranuclear Palsy and Cortico‐Basal Degeneration.

While TauRx corporate headquarters are in Singapore, its primary research facilities are in Aberdeen, Scotland.