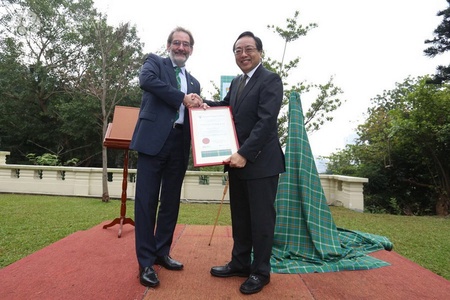 A specially commissioned tartan was presented to the University Hong Kong (HKU) by the University of Aberdeen in a ceremony on Monday (October 29, 2012) as a gift to mark HKU’s centenary.

The registered tartan also celebrates the historic links between the two Universities and the collaborations that will continue into the next century.

The “HKU Tartan” is inspired by the green and blue of the HKU Shield which was granted in 1913. The red and gold are for the lion on its field of crimson. The narrow black lines on white denote the open book bearing the University’s Chinese motto and the Latin version “Sapientia et Virtus” and the vibrant green represents the modern outlook of the University and HKU’s Centenary.

Lord Wilson said: “It is the University of Aberdeen’s great pleasure to help commemorate both the longstanding relationship between our two universities and the centenary of Hong Kong University through a small gift which embodies the Scottish tradition.

“The two institutions share very special historic links, which the University of Aberdeen is very proud of, but we are equally proud of the continuing modern relationship we have with what has become one of the great universities of Asia and the world.”

On Sunday (October 28) a special event for Aberdeen alumni based in Hong Kong was also staged.  It was held in honour of Lord Wilson and attended by more than 50 Aberdeen alumni.

Mrs Hamilton is a supporter of the Granite Pearl scholars who come from Hong Kong to study at Aberdeen, and many of the scholars were in attendance.

During the event the establishment of a new fund was announced named in honour of Lord Wilson, to offer scholarships for postgraduate taught students open to all Hong Kong nationals.  Three scholarships will be awared in the first year and will include tuition fees, a maintenance allowance and return flights from Hong Kong.  Applicants must demonstrate outstanding academic ability and display exceptional talent.

Lord Wilson was installed as Chancellor of the University in 1997 following a career which saw him appointed as 27th Governor of Hong Kong from 1987 until 1992.

The fund to establish the Wilson Scholarships recognises both his remarkable career and a fundamental role in the leadership of the University of Aberdeen.