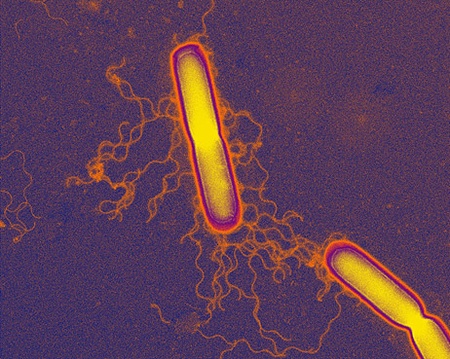 Rowett scientist Professor Harry Flint and his team are part of a research collaboration which has identified a combination of six naturally occurring bacteria that eradicate a highly contagious form of Clostridium difficile, an infectious bacterium associated with many hospital deaths.

Three of the six bacteria have not been described before, and the researchers say this work, in mice, may have significant implications for future control and treatment approaches.

The researchers found that this strain of C. difficile, known as O27, establishes a persistent, prolonged contagious period, known as supershedding that is very difficult to treat with antibiotics. These contagious “supershedders” release highly resistant spores for a prolonged period that are very difficult to eradicate from the environment. Similar scenarios are likely in hospitals.

C. difficile can cause bloating, diarrhoea, abdominal pain and is a contributing factor to over 2,000 deaths in the UK in 2011. It lives naturally in the body of some people where other bacteria in the gut suppress its numbers and prevent it from spreading. If a person has been treated with a broad-spectrum antibiotic such as clindamycin, our bodies natural bacteria can be destroyed and the gut can become overrun by C. difficile. The aggressive strain of C. diff analysed in this study has been responsible for epidemics in Europe, North America and Australia.

“We treated mice infected with this persistent form of C. diff with a range of antibiotics but they consistently relapsed to a high level of shedding or contagiousness,” says Dr Trevor Lawley, first author from the Wellcome Trust Sanger Institute. “We then attempted treating the mice using faecal transplantation, homogenized faeces from a healthy mouse. This quickly and effectively suppressed the disease and supershedding state with no re-occurrence in the vast majority of cases.”

“This epidemic caused by C. diff is refractory to antibiotic treatment but can be suppressed by faecal transplantation, resolving symptoms of disease and contagiousness.”

The team wanted to take this research one step further and isolate the precise bacteria that suppressed C. diff. and restored microbial balance of the gut. They cultured a large number of bacteria naturally found in the gut of mice, all from one of four main groups of bacteria found in mammals. They tested many combinations of these bacteria, until they isolated a cocktail of six that worked best to suppress the infection.

“The mixture of six bacterial species effectively and reproducibly suppressed the C. difficile supershedder state in mice, restoring the healthy bacterial diversity of the gut,” says Professor Harry Flint, senior author from the University of Aberdeen's Rowett Institute of Nutrition and Health.

The team then sequenced the genomes of the six bacteria and compared their genetic family tree to more precisely define them. Based on this analysis, the team found that the mixture of six bacteria contained three that have been previously described and three novel species. This mix is genetically diverse and comes from all four main groups of bacteria found in mammals.

These results illustrate the effectiveness of displacing C. diff and the supershedder microbiota with a defined mix of bacteria, naturally found in the gut.

“Our results open the way to reduce the over-use of antibiotic treatment and harness the potential of naturally occurring microbial communities to treat C. difficile infection and transmission, and potentially other diseases associated with microbial imbalances,” explains Professor Gordon Dougan, senior author from the Wellcome Trust Sanger Institute.

“Faecal transplantation is viewed as an alternative treatment but it is not widely used because of the risk of introducing harmful pathogens as well as general patient aversion. This model encapsulates some of the features of faecal therapy and acts as a basis to develop standardized treatment mixture.”

This project was funded by the Wellcome Trust and the Medical Research Council.