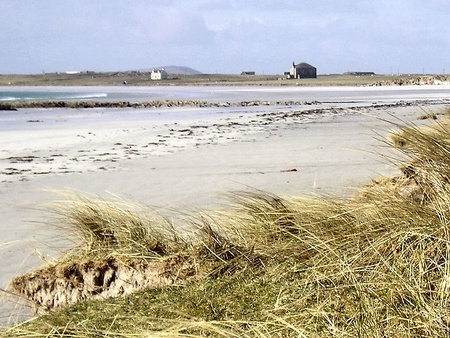 A postgraduate student from the University of Aberdeen travels to the west coast this week as part of his research project which aims to help rural and remote communities cope better when vital transport links are disrupted.

Researcher Konstantinos Papangelis will be on the Isle of Tiree from this Thursday through next week to see firsthand the transport issues for the local community, and to gather the experiences and views of people living on this most westerly island of the Inner Hebrides - which is just 12 miles long and three miles wide.

There will be several opportunities for local residents to meet Konstantinos and give him their own personal stories over a cup of tea or coffee. He will be at the Rural Centre Cafe on the island from 10am to 12 noon on Friday 26, Saturday 27 and Sunday 28 October.

Konstantinos will also be attending the TechWave event from 25-29 October at the Tiree Rural Centre, which is a hands-on making-and-meeting event exploring the edges of technology on the wild edge of Scotland.

Says Konstantinos “I’m interested in hearing people’s personal stories about travelling when there are disruptions, for example if they have found themselves stranded on the mainland, or on the island.

“I want to hear how people living in a relatively remote area such as Tiree make choices about transport to get around during a period of disruption for whatever reason. I’m also keen to hear what information would be most useful to help them make their decisions.

“People’s real-life experiences will help me in my project to design, with my colleagues, solutions that would use technology like mobile phones to help people decide if, how and when to travel when disruptions are happening or forecast.”

Konstantinos, who hails from Greece, was awarded a postgraduate scholarship from the Chartered Institute of Logistics and Transport to support the costs of his fieldwork - which is part of a project called Informed Rural Passenger (IRP). He has already spent weeks interviewing local people in the Scottish Borders, organised focus groups in various areas of urban and rural England and Scotland, and travelled widely through Europe to gather views and experiences in our European neighbours.

IRP is coordinated by the dot.rural research hub, a digital economy research centre at the University of Aberdeen funded by a five-year £11.8 million grant from the Research Councils UK Digital Economy Programme and which began work in October 2009.

The aim of dot.rural is to explore how advances in digital technologies such as mobile devices and the internet can enhance the delivery in rural areas of crucial services, including transport and healthcare. dot.rural also investigates how new digital technologies can benefit rural economies and communities by promoting new forms of enterprise in areas such as tourism and nature conservation, bringing rural communities together with researchers from a range of disciplines including computing science, communications engineering, human geography, sociology, environmental science, medicine and transport.