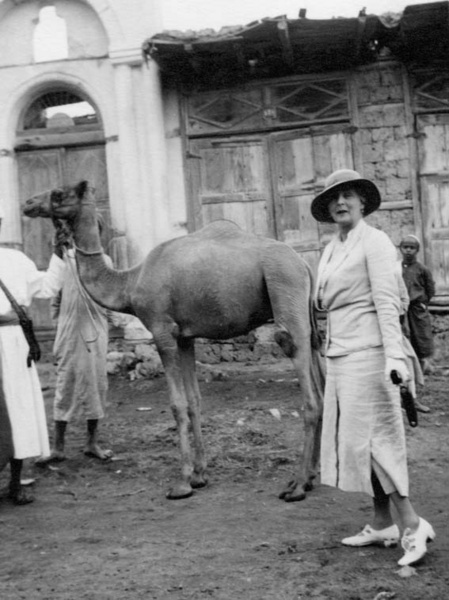 Photographs of Saudi Arabia taken by Queen Victoria’s granddaughter in the year oil was first discovered in the Kingdom are to go on public display in Scotland for the first time.

The University of Aberdeen will host an exhibition of pictures taken by Princess Alice Countess of Athlone  in 1938 which capture personalities, customs, traditions and a way of life which was about to change forever.

The exhibition, ‘Journey of a Lifetime’, will be launched on Thursday (October 18) with a lecture by the Rt. Hon Baroness Symons, Chairman of the Arab British Chamber of Commerce

Princess Alice was the first member of any European royal family to travel to Saudi Arabia and, as a keen photographer, she and her entourage, including her husband the Earl of Athlone, chronicled their journey in a series of pictures of places and events from meeting King Abdulaziz and his sons in Jeddah to travelling across the desert, their cars often trapped in sand and having to be physically pulled out by rope.

Her visit coincided with a pivotal moment in Saudi Arabia’s history as Princess Alice was in Saudi Arabia when commercial quantities of oil were first discovered and visited the famous Well number 7.

The photographs now belong to the King Abdulaziz Public Library Riyadh and are on loan for the exhibition, which runs until mid January in the MacRobert Building, University of Aberdeen.

The opening will be attended by the Deputy Supervisor General of the King Abdulaziz Public Library Dr Abdulkareem Al Zaid, and the Cultural Attache Dr Faisal M Almohanna Abaalkhail.

HRH Prince Mohammed bin Nawaf, Ambassador of the Kingdom of Saudi Arabia to the UK said: "I am delighted that this exhibition is now going on show in Aberdeen - the UK's oil capital.

“The unification of Saudi Arabia in 1932 by King Abdulaziz bin Abdulrahman Al Saud, or Ibn Saud as the West has come to know him, and the discovery of oil in 1938 has led to extraordinary development in Saudi Arabia with the establishment of a world class infrastructure.

“The Saudi Arabia of Princess Alice has vanished with the march of progress and these photographs are a unique and valuable link to the past.   But what has not changed is the welcome and warmth of the Saudi people towards our many friends amongst whom we include the people of Aberdeen, many of whom have worked alongside us over the past 80 years."

HE Dr Abdulkareem Al Zaid, Deputy Supervisor of the King Abdulaziz Public Library said he was delighted  that the exhibition was on display in Scotland for the first time.

The Rt Hon Baroness Symons of Vernham Dean, Chairman of the Arab British Chamber of Commerce will be giving the launch lecture. She said: “I am delighted to be giving this lecture. The visit ofHRHPrincess Alice and the discovery of oil was pivotal not just for Saudi Arabia – but also for the UK’s relationship with Saudi Arabia and for the world economy as a whole.”

“It is a great honour to be the first institution in Scotland to show 'Journey of a Lifetime' and we are looking forward to meeting staff from the King Abdulaziz Public Library and fellow associates at the launch.”