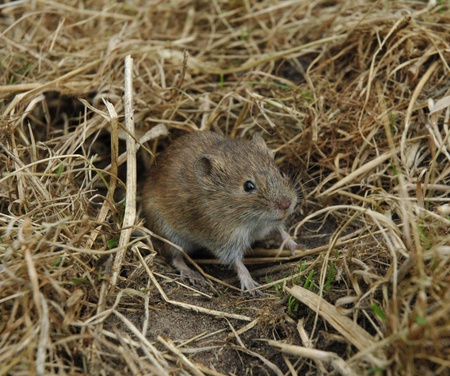 A dramatic change in the fluctuations of vole numbers is being seen across Europe, according to a major international study.

The ‘flattening’ in population numbers has serious implications for other species which feed on the small grass-eating rodents.

The natural order for voles is for their numbers to vary enormously from year to year in a pattern which repeats itself every three to four years.

In a boom year – known as an outbreak - a patch of grass the size of football pitch could shelter in excess of 500 voles.  In a crash year, only a handful, maybe as few as one or two, would survive in the same area. However, numbers would rebuild again to reach the high densities of the previous outbreak.

These cycles of vole abundance used to act as the pace-maker in ecosystems because voles are a food staple for animals such as owls, kestrels, weasels and foxes.

However, a synchronised change in vole population cycles leading to the gradual loss of those vole outbreaks has been seen across the Continent over the last 20 years, according to the paper Europe-wide dampening of population cycles in keystone herbivores published today (Friday, April 5) in Science.

Scientists from Aberdeen, Norway, Sweden, Finland, Germany, Poland and France spent three years studying vole patterns and analysing datasets - some stretching as far back as 1970 and many others from the 1980s.

Professor Xavier Lambin, senior author of the paper and Professor of Ecology at the University of Aberdeen, said: “Smaller herbivores like voles have population cycles which have a boom or bust dynamic - there used to be times of plenty of the animals and times of scarcity, as part of natural processes.

“However evidence has emerged in recent years of a greater uniformity in vole abundance between years.  The outbreaks are not longer as marked. Like a weakening heart, the beat of the cycle is becoming fainter and this will profoundly affect many other species in ecosystems.

“We studied 12 populations of voles across Europe and found that while a faint population cycle remains, it’s now much dampened down. The change is most evident in spring, reflecting a worsening of conditions for voles over winter.

“Given the consistency of the pattern of decline taking place on a continental scale across Europe, scientists suspect a global, probably climatic, cause.

Entire populations of predators were structured by the production of large cohorts born in years of abundant vole supply.  Whether vole predators breed, how many offspring they produce, how well they survive or impact other species, were all shaped by those regular predictable pulses that are now vanishing.  Species most reliant on voles such as barn owls, kestrels and arctic foxes are experiencing long term changes to their food supply.

Professor Lambin added: “As the pace maker role of high amplitude vole cycle is being lost, ecosystems that used to be structured by vole cycles may settle to other states. We do not know yet what those new states will be: what species will cope, which ones will suffer and decline to extinction.

“The world will be a less exciting place without those spectacular fluctuations.  It is a bit as if the Serengeti was to lose the huge disturbance caused by the large herds of wildebeest zebra and antelopes migrating. Here such a change is taking place on our door step, in Europe.

“Voles are an extraordinary species and their loss would make the world a duller place. But much more than that, it could have a detrimental cascade effect across the food chain on ecosystems as diverse as farmland, forest and arctic tundra.”