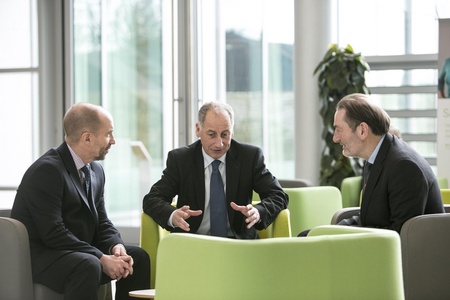 BP, which was recently chosen as the ‘Graduate Employer of Choice’ in the Times Top 100 Graduate Employer Awards, is investing almost a quarter of a million pounds over the next three years in an “Energy Partnership” collaboration with the University of Aberdeen and Robert Gordon University.

With a focus on geoscience, petroleum engineering and subsea engineering disciplines to help address some of the North Sea’s identified skills shortages, BP will fund and support a number of activities within the partnership agreement.

Included within this will be an undergraduate sponsorship scheme, worth 20K per year to each university and up to six intern placements per year for students from each university with BP. In addition BP will provide up to date data and educational opportunities for the two institutes to help support relevant courses. This will include providing a suite of core materials and data, the provision of a guest lecturer from its senior management team to both Aberdeen and RGU and two “Discovery Days” visits per university to BP’s North Sea HQ or other North Sea facilities.

The partnership agreement is also looking at a range of other collaborative ventures including the provision of prizes for specific disciplines, student mentoring opportunities and strengthening and improving research and development links.

The new collaboration, which represents a significant and innovative partnership between the two universities and a major private sector organisation, is in addition to the sponsorships and MSc scholarship which BP already provides to the two universities.

Commenting, BP’s Regional President for the North Sea, Trevor Garlick said, “Both RGU and Aberdeen Universities are a crucial source of graduates and talent for the whole of the oil and gas industry and they play an important role in the society and economy of the North East of Scotland. I am delighted that we have been able to form these mutually beneficial partnerships which will enable BP to showcase the industry and careers available while supporting students through their undergraduate studies.”

Prof Sir Ian Diamond, Principal of the University of Aberdeen said: “BP has been a long-standing  friend of the University of Aberdeen, and we have worked together on projects including the British Science Festival and the fantastic work of TechFest in inspiring the next generation through science.  What may be less visible is the invaluable support BP provides to the next generation of geoscientists and engineers through scholarships, placements and material which makes learning scenarios as realistic as possible. We are delighted that more students will now have the opportunity to benefit their future careers through this growing partnership.”

Professor Ferdinand Von Prondzynski, Principal of RGU said: “BP and Robert Gordon University have had a long-standing partnership that has benefited our students, the university and the industry. The company's new initiatives will give significant support to the city and region and help to establish the North-East as a high value innovation and skills centre in the oil and gas industry. We are strongly committed to this partnership and welcome the collaboration with BP and the University of Aberdeen.”