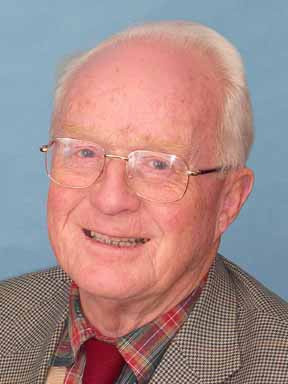 John was appointed as Assistant Lecturer in the Education Department at the University of Aberdeen in 1949. His PhD followed three years later in which he examined the effect of family environment on intelligence, and questioned the prevailing assumption that intelligence was inherited - an idea that continued to be central to his thinking. In 1963 he was appointed to the first Chair in Education at the University and held that until he retired.

Between 1965 and 1975, in collaboration with colleagues he wrote six books, five book chapters, 23 journal articles, and spent summers teaching in California, Australia, New Zealand, visited South Africa, started research projects in Norway and the Netherlands, and edited the British Journal of Educational Psychology.

John chaired the Educational Research Board of the Social Science Research Council, which allocated research money to universities across Britain. He also chaired the Scottish Council for Research on Education and served on many other committees, which led to the award of an OBE for services to Scottish Education. More recently, the University of Edinburgh awarded him an honorary doctorate in recognition of his international research reputation. He was the first president of the British Educational Research Association (BERA) and was awarded honorary life membership in 2005, in recognition of services to education research in Scotland.

Even after retirement, John was very much involved in educational research.  He remained active in the School of Education in a number of roles: PhD supervisor, editorial board member of Education in the North, editor for  Aberdeen University Education Research Papers, active contributor and speaker to research seminar series, staff mentor for educational researchers, to list but a few.  John’s intellect was generously shared as a result of his willingness to support colleagues.

In addition to his educational pursuits, John also had a wide interest in leisure pursuits. He played golf from a very young age and at one time had a very competitive handicap.  He was also a mountaineer and rock climber, climbing Half Dome in Yosemite on his 75th birthday. After his retirement he took up orienteering and competed successfully in international events, coming first in his age group on more than one occasion.

He was a remarkable man who lived an exciting and enjoyable life. So many people have benefitted from his knowledge and wisdom. He touched so many lives and made a difference in the world of education.

The Funeral service will be held at Aberdeen Crematorium, West Chapel, on Friday, October 12, 2012, at 1.35 p.m.  All friends and colleagues are respectfully invited. Family flowers only.  Donations in lieu, may be given to charities of John's choice at the crematorium.