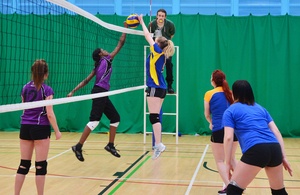 Britain's biggest varsity event between the University of Aberdeen and Robert Gordon University got under way on Wednesday despite overnight snow resulting in almost half the events being cancelled.

All outdoor sports were postponed due to the weather but indoor events proceeded as planned with the University of Aberdeen holding the lead at the end of play.

University of Aberdeen Sports President Clare McWilliams said: “I couldn’t believe it when I woke up this morning. It was forecast but I didn’t think it would be this bad. I’ve been told this is the worst disruption to the competition in its 16 year existence.”

Despite the cold snap, dozens of fans flocked to Aberdeen Sports Village to watch the sports that did go ahead including basketball, volleyball, table tennis, squash and trampolining.

Offsite the University of Aberdeen riding club triumphed as did the curling team. AU’s women’s and men’s volleyball teams triumphed in closely fought games whilst just one point decided the men’s basketball, AU running out 80-79 winners.

The outstanding 11 fixtures including football, rugby, Gaelic football and hockey will be played on April 17 – with the overall winner of the competition being declared that evening.

Clare McWilliams added: “It’s a shame not to have the overall result decided on the one day but this just spreads the excitement over a longer period. Hopefully we’ll get even bigger crowds for the deciding events – especially if the weather improves! We want to win it and we want to win it in style so here’s hoping we keep up the good results.”